BTS Makes History at the Grammys as First K-Pop Presenters 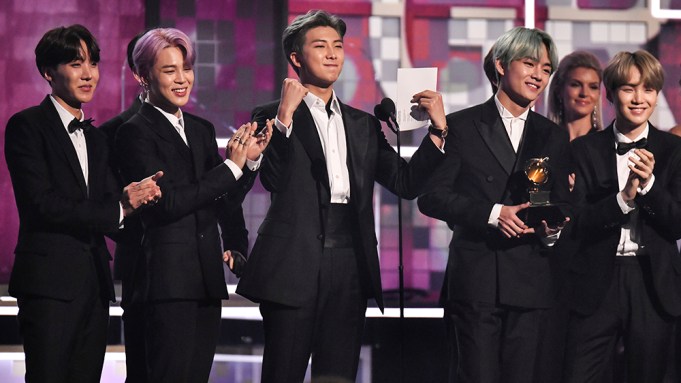 Korean boy band BTS made history tonight as the first K-pop group to present at the Grammy Awards.

The group took the stage for the best R&B album category, awarding the Grammy to H.E.R. for her self-titled album.

“Growing up in South Korea, we always dreamed of being on the Grammys stage,” said RM. “Thank you to all our fans for making this dream come true and we’ll be back.”

After coming on the music scene in 2016, BTS – Bangtan Sonyeondan or “Beyond the Scene” – has skyrocketed into international fame following three world tours and several highly successful albums. Their most recent, “Love Yourself: Tear,” became the first K-Pop album to reach number one on the Billboard 200 albums chart and was also nominated for best recording package (i.e. artwork) at this year’s Grammys, alongside the Seoul-based branding outfit HuskyFox.

Other nominees in the best recording package category include Mitski for “Be the Cowboy,” St. Vincent for “Masseduction,” The Chairman for “The Offering” and Foxhole for “Well Kept Thing” — the award went to “Masseduction.”

The band also has a long history of breaking barriers, becoming the first Korean pop group to perform at the 2017 American Music Awards in November of last year and as well as the first Korean artists to perform at New York’s Citi Field Stadium during their “Love Yourself” world tour last year. The group also boasts a huge fan base, drawing more than 550,000 fans across 40 concerts and 19 cities during their “Live Trilogy Episode III The Wings” tour in 2017.