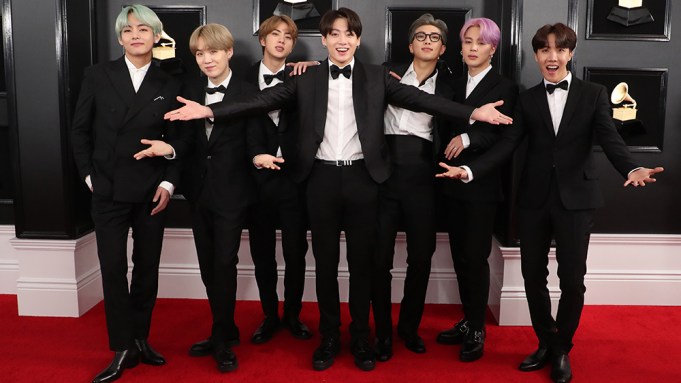 The BTS army might be gaining some monsters with the band’s next collaboration.

During the Grammys red carpet, the K-pop sensation told Variety‘s Marc Malkin that they hope to work with a number of this year’s nominees, including Camila Cabello, Travis Scott, and Lady Gaga.

As for award show excitement, BTS band member RM spoke for all of his bandmates saying, “We’re finer than fine; we’re super fine.”

“It’s our first time ever presenting an award, and also the Grammys so… yeah I stayed up all night,” he added.

Variety broke the news earlier this week that BTS would be presenting a Grammy Sunday night, becoming the first K-pop act ever to do so.

BTS was nominated for best recording package (i.e. artwork) at this year’s Grammys, alongside the Seoul-based branding outfit HuskyFox. Other nominees in the category included Mitski for “Be the Cowboy,” St. Vincent for “Masseduction,” The Chairman for “The Offering,” and Foxhole for “Well Kept Thing.”

The nomination comes on the heels of their “Love Yourself: Tear” album, which helped launch the boy band into international fame before becoming the first K-pop album to reach number one on the Billboard 200 albums chart. During the resulting tour, the band also became the first Korean pop group to perform at the 2017 American Music Awards as well as the first Korean artists to perform at New York’s Citi Field Stadium.