From BTS to Blackpink, a Historic Weekend for K-Pop 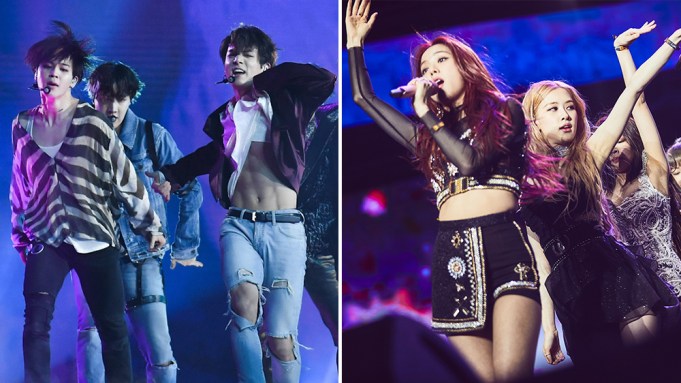 This weekend marks the first of the Coachella Valley Music & Arts Festival, but the bash isn’t the only music phenomenon on everyone’s mind. Korean pop artists are posting a banner week in their forge into the U.S. mainstream, with BTS breaking a YouTube record and performing on “SNL” and Blackpink scoring a first with its Coachella performance.

BTS, the best-known K-pop group outside South Korea, shattered YouTube’s record for most views in 24 hours with the debut of the music video for “Boy With Luv,” featuring Halsey. As of 5 a.m. ET Saturday, “Boy With Luv” had racked up just over 78 million views.

The statistic is unsurprising — K-pop fans are some of the most plugged in in the biz. In fact, BTS nabbed the record from Blackpink, a K-pop girl group who had landed the feat just a week before with its music video for “Kill This Love” with 56.7 million views.

Blackpink are far from newcomers on the scene, with the group’s millions of fans — known as “Blinks” — frequently setting records for the group, and then breaking them with Blackpink’s next release. Blackpink made its U.S. television debut in February, performing on “The Late Show with Stephen Colbert,” followed by an appearance on “Good Morning America.”

This weekend, the group made its Coachella debut with a festival-winning performance on Friday. Variety‘s Chris Willman wrote that “if this was a slightly abridged version of what they’ll shortly be taking to a headlining arena trek, there was little that was condensed about the audience’s enthusiasm as the K-pop quartet managed to speed through 13 songs in a set lasting just over 50 minutes.” Their set marked the first time a female K-pop group performed at Coachella, and though other South Korean acts have taken to the desert before, Blackpink is the first to do so “at the height of its powers,” as the L.A. Times remarked.

The K-pop train’s weekend surge is set to continue, with BTS making its “SNL” debut — also the first time a K-pop group took to 30 Rockefeller — to promote their latest album, “Map of the Soul: Persona.” While it’s unknown what song they’ll perform or how seven members will fit a choreographed dance routine inside a relatively small stage, one thing is certain: this weekend marks a win for K-pop.