The one-off L.A. concert had Carlile covering Mitchell's 1971 classic "Blue," to an audience that included Elton John and Mitchell herself. 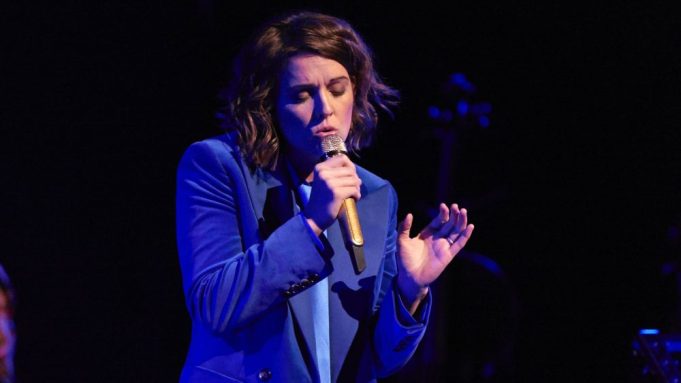 If nothing else was established by Brandi Carlile’s live recreation of Joni Mitchell’s 1971 “Blue” album — and plenty else was — it was that the 38-year-old singer has nerves even steelier than her vocal cords are pliable. Mitchell is as impossible to emulate as a ridiculously tricky singer, songwriter and picker as they come, which would set the bar for homage high enough even if she wasn’t known for not always having suffered foolish acolytes gladly. Carlile had a pretty good head start on getting a thumbs-up from Mitchell for her tribute show Monday night at Walt Disney Hall, where she made it clear to the L.A. audience that in recent months she had ingratiated herself into her heroine’s wine cellar, and probably heart, too. But still: Playing “Blue” in its entirety in front of Mitchell (who was sitting two seats away from another Carlile hero, Elton John) should’ve been enough to drench the coolest cucumber in flop sweat.

Elton, as it turned out, had a term for any singer dotty enough to assign herself “Blue” as public homework. “Ever since I said I’d do it, I immediately regretted it,” Carlile admitted at one point. “I knew I was biting off more than I could chew. I had dinner with Elton last week. He called me a crazy bitch,” she said, to considerable laughter. John might have been referring specifically to her intention to avoid cheat sheets. “I said I wasn’t going to use Teleprompters, because I know the album; it’s written on my soul. And he said, ‘You’re a crazy bitch. You need to get those Teleprompters.’” Carlile paused, taking in the enormity of all that biting and chewing. “This has been a time of tremendous growth for me,” Carlile said, taking her tongue out of her cheek for a moment.

This was, by any standard, an event: a set of 10 confessional songs that, by acclimation, is one of the landmark albums of the previous century, brought back to life by the best pure singer we’ve had in this one. The concert, given its own title (perhaps in a nod to the classical programs that usually fill the hall), “Songs Are Like Tattoos,” was a a one-off, with no cameras or mobile trucks on hand to record the event for posterity. (No smartphones, either; attendees’ devices were locked into Yonder pouches at the door.) There was a lot of talk from the stage about the need to evangelize Mitchell’s body of work to the world, but Carlile doesn’t intend to do that by further disseminating this particular show. “Party of One” isn’t just the name of the lone original song that Carlile performed Monday; that phrase might also describe Carlile’s real intended audience for this tribute, seated in the fourth row.

Or maybe Carlile was really her own target audience for the show? “I’m gonna ask the question that you’re all wondering: Why the hell did I decide to do this?” For starters, Carlile explained, “None of us get the chance to see ‘Blue’ live. So I’m listening right alongside you tonight and enjoying this classic and amazing album, just like you are. And I’m not here to reinvent the wheel. I really haven’t put my own spin on hardly any of this music. I’ve just worked my ass off to try and learn and sing it to the best of my ability… So tonight isn’t about me; it’s not about ego: It’s about you getting to hear ‘Blue’ live.” Plus, in the macro sense, Carlile said, “I feel like we are living in a very unique time, because I don’t think anybody ever tapped themselves on the shoulder and said, ‘Holy shit, we’re alive at the same time as Shakespeare!’ Right? I am not exaggerating when I say that Joni Mitchell will be remembered that way, and we should all pinch ourselves” to be sharing that time, that airspace. “And if there’s anything to celebrate in these trying times, it’s that.”

Carlile brought in a healthy complement of players, including her usual right- and left-hand men, identical twins Phil and Tim Hanseroth, plus a pair of singers who only play twins on stage, Lucius’ front women, Jess Wolfe and Holly Laessig of Lucius… not to mention, among others, a string ensemble that included “original O.G.” Scarlet Rivera, and drummer Russ Kunkel, who happened to play on three songs on the original album. “Have you noticed it takes about 13 people on this stage tonight to do Joni’s one job?” she asked. “I can’t play guitar and (do) this shit and still sing it,” she admitted — even though that’s exactly what she did in a couple of instances, accompanying herself on acoustic guitar, sans band, on “Little Green,” and on piano on “River.” At some point, the plan had been to do more self-accompaniment. Fans know that James Taylor played guitar on three songs on the 1971 album, and “James was so excited about this show, and so sad he couldn’t be here. But,” she added tantalizingly, “he spent hours recording tapes of himself playing the guitar parts and sending them to me, so that I could learn that I cannot play those parts.”

If Carlile has the zealotry of a convert, she has a very distinct conversion experience she can point to, and get some nervous laughs in explaining. She asked how many in the crowd had seen an incriminating headline on a Los Angeles Times interview that had just been published to preview the show. “I was mortified that the headline said (something) like ‘Non-believer learns to love Joni Mitchell.’ What the hell? (But) you know what, it’s honestly true. T Bone Burnett played ‘Blue’ for me in about 2005, and I was a young girl, and I wanted to spit and swear and cuss. And I still do all that. But didn’t understand how much toughness there was in femininity.” Later, after meeting her wife-to-be, Catherine Shepherd, she failed the “Blue” test again, but this time with different results. “I was like, ‘Yeah, I don’t love Joni Mitchell.’ And Catherine’s like, why the hell not? I said, ‘Because I don’t like the lyric “I want to renew you, I want to shampoo you.” It bothers me; it’s really heterosexual. She doesn’t sound tough.’” A suitably aghast Shepherd, after momentarily being at a loss for words, asked her new flame if she knew what “Little Green” was about, and put it on again for Carlile —  “and it changed my life. It didn’t just change the way I view music. It changed the way I view women, and what tough means. So, when I delved into “Blue,” I made up for lost time. As you can see, I’m an obsessive person,” she said, resplendent in an all-blue suit.

“And now,” Carlile added, “I love the lyric ‘I want to renew you, I want to shampoo you.’ I don’t think I’d ever really had anybody shampoo me at that point in my life. I needed a little bit of falling in love.”

Freeing herself for most of the show from guitar and piano allowed Carlile to do a lot more strolling than she would in one of her own sets, wandering not just across the stage — and occasionally as close into Mitchell’s field of vision as she could get — but through the treetops of Mitchell’s highest trills. In the ’60s and onward, Mitchell was revolutionary in how she would float from a casually conversational tone into a devastating falsetto without making any of the seemingly necessary stops in-between. That’s always been peculiarly true of Carlile, too, even in the years before she had her Joni Mitchell conversion experience. (She was probably being influenced then without knowing she was influenced then.) Confession and conversation finally gave into the high, wordless aria that closes “The Last Time I Saw Richard,” which may have left the crowd tattooed for some time to come with the thought of the last time they saw nirvana.

After performing the ten “Blue” songs back to back — four of which got extended standing ovations — Carlile brought the Lucius members back to sing harmonies on one additional song of Mitchell’s, a sort of hopefully dystopian, secular-gospel ballad called “Shine,” the title song from her last 2007 studio album. (Mitchell has not performed publicly or recorded since a series of health setbacks, from which she has largely recovered.)

“I’ve been so proud to sing ‘Shine,’ because it shows that … nothing Joni Mitchell began or ended with ‘Blue.’… We go into ‘For the Roses’ and ‘The Hissing of Summer Lawns’ and ‘Hejira,’ and we just keep right on going all the way inside. We’re gonna realize that we lived in the time of Shakespeare or Rembrandt. And I won’t sleep eight hours until everybody in the world feels that way about Joni Mitchell.” On this particular night, anyway, she had even more reverence to throw around: “I also want to send this one out to my great hero who’s here tonight, without whom I would not play the piano, and I hope he’s not judging me — but I think he is… You’re right, Elton: I’m a crazy bitch. Crazy about you, baby.”

After a pipe organ fanfare, the night began with a newly made video of Carlile’s more famous friends or acquaintances reciting lyrical snippets from their favorite Mitchell songs, from Tom Hanks and Reese Witherspoon to Brittany Howard and Mavis Staples. It was fitting, for obvious reasons, that Dave Grohl’s pick would be “Go Tell the Drummer Man.” Sheryl Crow and Emmylou Harris were pictured back to back calling out lines from “Amelia”; Elton picked a more recent number, 1998’s “My Best to You”; Bernie Taupin’s was “Coyote”; Rosanne Cash’s, “Night Ride Home”; Carole King picked “For Free”; Clive Davis, “Both Sides Now.” Emma Thompson recalled the “Big Yellow Taxi” lyrics about how much it would cost to visit the world’s surviving greenery in a tree museum and added, “I think it will be a bit more than that now, Joni.” Graham Nash, one of the inspirations for the “Blue” album, mentioned the years he spent with Mitchell and said of the album, “It makes me smile and makes me sad to listen to it.”

In putting together the montage, Carlile saved the best, or at least oddest, for last: Marilyn Manson, seen glaring at the camera while reciting in voiceover, as if telepathically, the lyrics for “Blue,” including the line “Everybody’s saying that hell’s the hippest way to go.” Manson’s tongue-in-cheek nod to Mitchell’s irreverent mention of hellfire was the last sub-heavenly moment of the night.