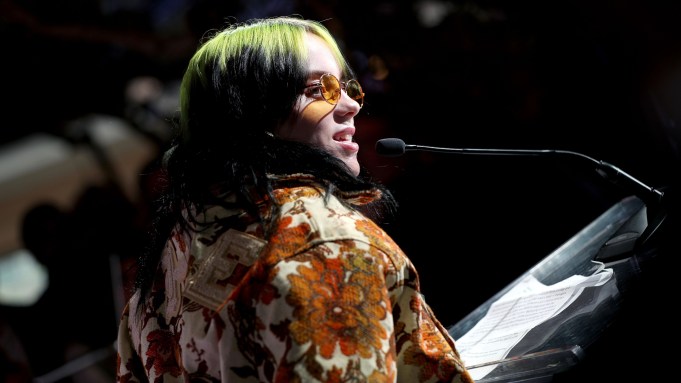 Billie Eilish was named Variety’s Hitmaker of the Year at our annual Hitmakers event in Hollywood on Saturday.which also featured Lil Nas X, Kacey Musgraves, Tyga, YG, Ellie Goulding and others.  She thanked many people, including her brother and collaborator Finneas — whom she welcome onstage to share the award — her family, her team, her managers, her label, and also had a few messages. She was introduced by Variety’s Jem Aswad, who wrote this week’s Eilish cover story; her and Finneas’ acceptance speeches follow in full.

“Thank you so much, Variety — thank you for not making me look stupid like everybody else wants to do on TV — love that,” she began. “Thank you guys for coming. I want to thank my whole team and everybody for listening to me. I never meant to make a hit, and I know that this is the Hitmakers awards — it’s crazy that you can make one without meaning to.

“And actually,” she continued, “when we were working on the album, somebody told me and my brother Finneas, my cowriter, that there was no hit on the album. I don’t know what that was supposed to do, I don’t know how that was supposed to help anyone — but that fool was wrong! It’s crazy to be sitting here with my mom and dad and brother and my team that I love so much, and [rappers] YG and Tyga are up here, and what the hell? I grew up on them! I grew up on so many of the people in this room.

“I wanna thank my team, my label, managers Danny [Rukasin] and Brandon [Goodman], who have always trusted me, my label guy Justin [Lubliner, of Darkroom Records], who was like the only person I trusted to begin with — and that’s no shade to anyone, but I feel like he saw something in me. I want to thank Alex Baker, my PR, I don’t think she gets enough credit for what she does.”

She also thanked Chelsea Dodson and Michelle An from Interscope’s creative team “for believing me and letting me do what I wanted and thinking it was a good idea — I know it was really easy to not think they were good ideas, so thank you for assuming they would be,” as well as her day to day manager Laura, Interscope chairman and CEO John Janick and EVP Steve Berman, and then called Finneas up to the podium: “Get yer ass up here!”

Finneas then took the mic and said, “I would just like to thank Billie for being naïve in her trust of a 17 year-old who had no idea what he was doing. It was incredibly ambitious, and you thought every idea I had was the best idea, and I couldn’t be more proud of every song that I’ve made with you.

Eilish then returned to the mic with a message for all of the creatives and executives in the room. “One more thing,” she said. “The last thing I wanna say is that I know there’s a lot of teams here, so managers and labels: Please listen to your artists, even if they have a stupid idea at least hear them out. It might not be stupid, so just listen to people and be open-minded and trust, and don’t think because it’s not like everything else doesn’t mean it’s bad.”