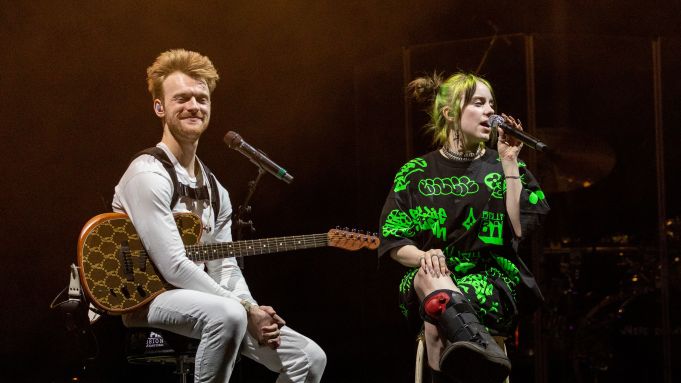 While Lizzo can rightfully be proud of being the 2020 Grammy Awards top nominee with eight nods, in a certain sense, Billie Eilish’s family — the 17-year-old singer and her brother and musical collaborator Finneas O’Connell — are the actual leaders with 11. The pair wrote nearly every song she’s released together, and Finneas (who is also a solo artist under just his first name) produced them all. He is the main instrumentalist on their recordings and in her live band, and she brings him to the front of the stage every night and introduces him as “my big brother.”

Together or separately, they’re nominated for Album of the Year and Best Pop Vocal Album (for “When We All Fall Asleep, Where Do We Go?”), Song of the Year and Best Pop Solo Performance (for “Bad Guy”), Best New Artist, Best Engineered Album (for Finneas’ work on “When We All Fall Asleep”), and Finneas also scored a Producer of the Year, Non-Classical nod in an interesting and competitive field: He is a rare producer nominated for just one release (ordinarily producers are nominated for several) alongside Jack Antonoff (Taylor Swift, Lana Del Rey), Dan Auerbach (Black Keys, Yola), John Hill (Khalid, Cage the Elephant, Carly Rae Jepsen) and Ricky Reed (Lizzo, Maggie Rogers, Maren Morris).

Asked whether she’s excited about the prospect of being a Grammy nominee, Eilish told Variety last month, “Oh dude, we’ve watched the Grammys every year for my whole life. I always used to judge everybody’s outfit — I would sit on my living room floor and just be like, ‘Her dress is so ugly!,’ she laughed. “But no, I’m really excited,” she continued more seriously. “I don’t care if I don’t win anything at all. It’s such a cool opportunity, and I’m so excited to go and see some of my friends.”

The pair, who were born four years apart, began recording together when Eilish was 11 or 12 (they’re uncertain exactly when). “He’s way better at writing music than I am, but that’s why it works,” she said. “We’re both good at different things, which is a good balance.” However, they didn’t start out writing together. “The first songs that we worked on together, he wrote one called ‘She’s Broken’ and I wrote one called ‘Fingers Crossed,’ and we recorded them and put them on SoundCloud just for fun. But then,” she continued, “he had written a song called ‘Ocean Eyes’” — the song that introduced Eilish to the world — “and we put that out, and somehow it got huge. And then we started writing together.”

The pair record constantly on tour — Finneas has a portable studio that they set up wherever they can get enough privacy. At a show in Houston last month, they were overheard by a reporter eavesdropping briefly outside Finneas’ dressing room, working on a gentle song that in retrospect sounded like “Everything I Wanted,” the single they released last week.

Finneas estimates that 75% to 80% of their songs are written “with us sitting next to each other at a piano or in a room with a guitar, singing a melody together,” he told Variety last month. “Like, we were writing a song yesterday where we came in with a melody that we both had ideas about, then one of us thought of a line, and the other made the line a little more polished — it’s like a relay race, in that we both feel like we have to kill our portion to get to the finish line.”

That competitive collaboration — or collaborative competition — has resulted in one of the year’s biggest albums, and seems likely to bring some Grammy gold to the O’Connell home mantelpiece as well.