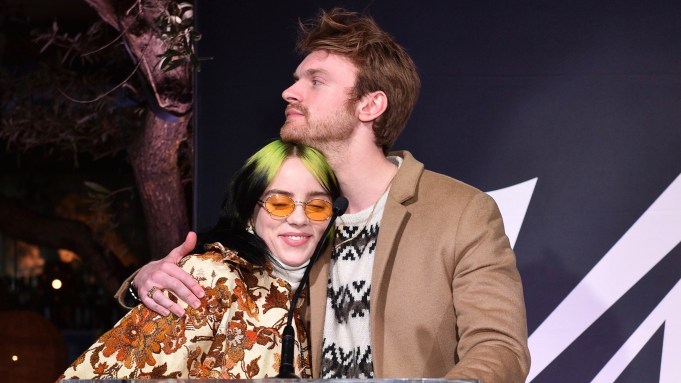 “Thank you so much, Variety. Thank you for not wanting to make me look stupid like everybody else wants to do on TV,” Eilish started. “When we were working on [When We All Fall Asleep, Where Do We Go?], somebody told me and my brother, Finneas who’s my co-writer, that there was no hit on the album. I don’t know how that was supposed to help anyone, but that fool was wrong!”

After extensively thanking her team, producers and label supports, Eilish turned toward O’Connell. “A big thank you to my big brother Finneas. Finneas is my best friend, my big brother, he’s four years older than me and we’ve been best friends forever. We started making music together when I was 13 and he was 17; he produces everything. He’s the only reason I’m anywhere in the whole world and he’s probably the only reason I’m alive.”

O’Connell joined his sister onstage to return the love:

Rapper YG — who accepted the hook of the year award for “Go Loko” — expressed love for the duo during their speech twice, shouting out “Westside!”

The duo, nominated for six Grammys this year, received the hitmaker of the year award. They were honored along with several other musicians as a part of Variety‘s third annual Hitmakers cohort.

(Check out photos of the Hitmakers brunch — including Lil Nas X and Kacey Musgraves meeting for the first time and exchanging phone numbers — here.)

South Korean boy band BTS — who received group of the year and announced that a new album was coming soon— accepted their award in a brief speech:

“Since we’re not very used to this kind of event, I’m very nervous, but I’m going to take it easy. First of all, I’d like to say thank you to Shirley [Halperin, executive music editor], of course, and all the editors at Variety for choosing us as group of the year. 2019 was truly a very surprising and exciting year for us; this event really made it even more special,” frontman RM said. After thanking their producers and team at Columbia Records, he continued: “We have to say thank you and that we love you to all the Armies all over the world who always sends us the greatest love and support.”

In addition to BTS, rapper Swae Lee accepted the crossover artist of the year for his work on Grammy-nominated hit “Sunflower.”

“When you do something that you love, you’re automatically going to be passionate about it and you’re going to do it the best way you know how to do it. When you get awards, this type of recognition, it lets you know people are still listening, loving the music as much as you do when you’re making it,” Lee said.

Global hot girl, Megan Thee Stallion shouted out her hometown in her acceptance speech for breakthrough artist of the year. The Houston rapper spent time chatting with YG at the brunch (and is seen below on the red carpet with Swae Lee.)