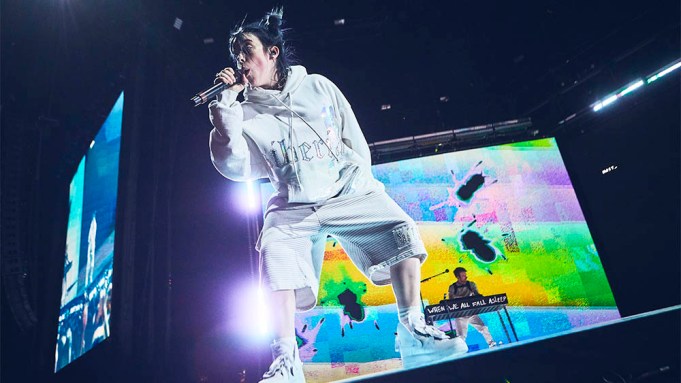 Long before she took the stage half an hour late for her debut at Coachella on the Outdoor Theater stage Saturday night, Billie Eilish had been one of the most anticipated artists at this year’s edition of the fest: the 17-year-old topped the album sales chart last week with her debut “When We All Fall Asleep Where Do We Go?,” breaking all sorts of records and cementing the young singer’s status as a true rising star. The album — a dark, moody melange of stark, synth-led pop — is already an album of the year frontunner; speculation of what she would bring to the Coachella stage was rampant, especially for many young fans who haven’t yet had a chance to see Eilish live during her rapid ascent to near-headliner-status.

So that delay — clearly caused by production issues, as harried stagehands tested pneumatics and keyboards — brought the frenzy to a fever pitch, which Eilish eventually mostly delivered on. Backed only by her brother/collaborator Finneas O’Connell an a slew of instruments and a drummer, Eilish was a confident, rambunctious performer, even when it was evident as she occasionally slowed down that she was overwhelmed by the massive opportunity. “I don’t deserve this,” she said at one point, clearly in awe of the sheer number of people in front of her.

Production was relatively stark — huge screens, affecting visuals, fractal projections on the floor under her — with the exception of a troupe of dancers in jaw-dropping choreography on one song, and Eilish herself performing on a bed as it dangled over the stage on the highlight “Bury a Friend,” her persona menacing a la the girl in “The Ring,” as the bed angled itself towards the audience. A collaboration with rapper Vince Staples on “Watch /&Burn” was a bust: his mic was accidentally muted for the entirety of the song. By the end of the set, for “COPYCAT,” Eilish had the crowd in her small palms, making everyone duck-and-jump in time with the song’s peak. It’s an old gimmick — but, like most of Eilish’s performance, one that she fully delivered on.