Festival Hotel Guide: Where to Stay for SXSW, Coachella and Other Music Festivals This Spring

The end of winter marks the unofficial start of festival season, and whether you’re going to SXSW, heading to Coachella or staying up till the wee hours at Ultra, we’ve rounded up some of the best places to stay while you’re in town for this spring’s most popular music festivals.

Hotels are booking up quickly, so you should reserve your rooms now. Or, keep these places in mind for the next time you’re visiting Austin, Palm Springs, the Coachella valley and Miami. Though the festivals only happen once a year, these properties offer lots to explore year-round.

The annual music, film, tech and media festival takes over Austin this month for a 10-day multi-genre, multi-medium experience that showcases up-and-coming bands, independent films and the latest in interactive technology. Unlike most of the other festivals on this list, which take place on a single property or site, SXSW is spread out throughout Austin, making it easier to book accommodations.

Where to Stay: The Fairmont Austin

The Fairmont Austin is where you’ll want to stay if you’re craving convenience with higher-end accommodations. The hotel will be celebrating its one-year anniversary during SXSW, and is one of the key host hotels for the festival. Among their activations: their 7th floor roof deck bar, “Rules & Regs,” will be hosting nightly performances by SXSW commissioned performers, a program that they have titled “SXSW Second Play Stage,” giving festival goers who may have missed a main performance the chance to still catch their favorite artists in a more intimate setting.

The Fairmont has become a key part of Austin’s hospitality scene since its arrival last March, thanks to its well-appointed rooms, five restaurants and bars, and its 37 stories of views that overlook the city. The hotel is also directly connected to the Austin Convention Center, making it a solid choice for those in town for business. See reviews and book here.

Housed in an old 1960s jazz club, the Austin outpost of LA’s popular LINE Hotel has quickly become an integral part of the city’s arts and culture scene, with a ton of live events, daily wellness classes (open to both guests and local residents alike) and art by emerging local artists set throughout the property. What we like: weekly kickboxing sessions with studio Knockout, and dance classes in partnership with Gwyneth Paltrow-approved athleisure brand Outdoor Voices. SXSW attendees can take advantage of the hotel’s complimentary bike rentals to get to their shows and screenings, while grabbing a coffee to go from LA’s celeb-favorite Alfred, which recently opened a location inside the hotel.

Opening this weekend: The hotel’s new rooftop lounge, P6, which converts the top deck of the building’s parking garage into a sprawling greenhouse with panoramic views of Town Lake, the South Austin skyline and the Congress Avenue bat bridge. The LINE also has a burger joint/dive called Dean’s One Trick Pony that is sure to be a hit with the SXSW crowd. See reviews and book here.

One of the largest electronic music gatherings in the world takes over Miami the last weekend of March, as the Ultra Music Festival lands in Magic City. This year’s headliners include Alesso, Afrojack, David Guetta, The Chainsmokers, Tiesto, Martin Garrix and Zedd. Tickets are still available here. Whether you’re attending for business or to take in the live music, you’ll want a quiet retreat to escape to once the night (or early morning) is done.

The “C” in “Mr. C” comes from “Cipriani,” as in the family behind the chain of Italian restaurants beloved by stars like Rihanna, Mariah Carey and George Clooney. Set to open this spring, Mr. C Coconut Grove transports the renowned service and glamour of the restaurants to South Florida’s bustling bayside digs. With a design reportedly inspired by a luxury yacht, the 100-room hotel features guestrooms with private outdoor terraces, an indoor/outdoor restaurant, and a rooftop bar, appropriately dubbed “Bellini.” Like its namesake restaurants, Mr. C (the hotel) prides itself on discreet, personalized service and offers an intimate, inviting alternative that’s worlds away from South Beach’s party scene. See reviews and book here.

You come to Miami for the oceanfront views, and both locals and visitors alike will tell you to stay at the Cadillac Hotel & Beach Club for just that. But there’s more to the luxe, airy property than ocean vistas. Newly renovated last year, the 1940s-era building has been returned to its Art Deco and mid-century glory, making it an important — and impressive — part of the Miami design landscape. The hotel finds its footing in that precious space between over-the-top European glamour and unassuming coastal cottage, never ostentatious in its approach to service or decor. Case in point: the hotel’s highly personalized Cadillac Concierge services, which will gladly help you arrange everything from a family snorkeling expedition, to a day-long getaway on the property’s private yacht. At night, settle in for beachside bites at the hotel’s “Bungalow by the Sea” before heading out to catch the festival’s late night acts. See reviews and book here.

Childish Gambino, Tame Impala and Ariana Grande headline this year’s Coachella Music Festival, which takes over Indio and the greater Palm Springs area for two weekends in April. Janelle Monae, Solange, Kid Cudi, Weezer and Khalid are also on the bill, among others. Tickets to this year’s event were sold out almost immediately, but passes are still available on sites like StubHub.

The Palm Springs Bureau of Tourism says a number of properties are already sold out for both weekends, though a few rooms are still available. You can check a site like Expedia or Hotels.com for availabilities (Hotels.com is also currently offering 10% off all bookings regardless of destination. Use promo code BLOSSOM at checkout).

If you’d prefer more of a homey experience or need accommodations for a large group or event, the booking site VRBO.com, offers a number of houses, condos and vacation properties for rent. VRBO (Vacation Rentals By Owner) has a diverse portfolio of property-types, from luxe, spa-like mansions, to cozy, secluded cabin retreats, great for those who want some space amidst the sea of people who’ll be descending upon the Coachella Valley next month.

You already know about The Ace Hotel & Swim Club in Palm Springs and the Kimpton Rowan has helped revitalize the downtown core (with a sprawling Starbucks Reserve opening up next door, along with Tommy Bahama’s “Marlin Bar” store/restaurant hybrid down the street). Here are two other properties to add to your list.

Where to Stay: Holiday House

Built in 1951 in the iconic mid-century modern style that has come to define Palm Springs architecture, Holiday House re-opened in 2017 as a charming and colorful 28-room boutique hotel. Each of the rooms is inspired by the property’s original designer, Herbert W. Burns, and his core values of livability and humility. To wit: guests will find thoughtful details like a well-stocked mini bar with local and independent spirits, complimentary bike rentals, and an “honor policy” ice cream bar and sundries shop. What we like: the free welcome drinks upon arrival (you check in at the bar!) and the hotel’s impressive art selection, which features works by John Baldessari, David Hockney and others on display throughout the property. See reviews and book here. 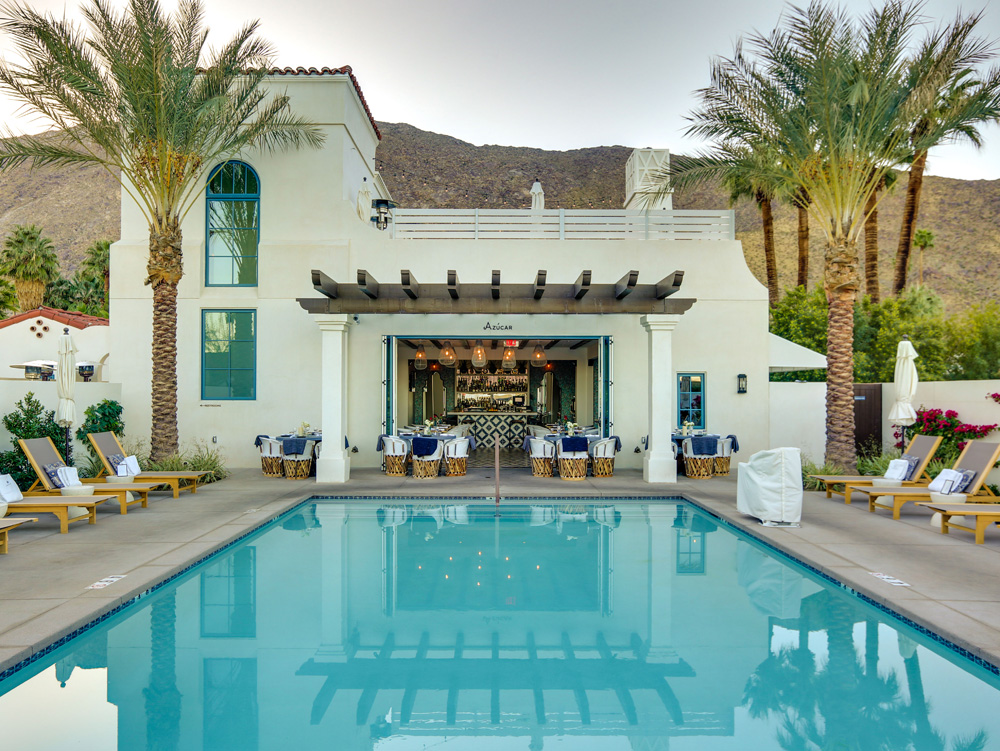 One of the hottest tables in town is at Azucar, the pretty-as-a-postcard restaurant located inside La Serena Villas, just off the bustling downtown strip. Originally built in 1933, the historic property was redeveloped as a luxury hotel in 2016, featuring 18 spacious and beautifully-designed guestrooms, a rooftop bar, and the aforementioned Azucar, which serves up a mix of local and traditional fare in an open-concept dining room with both poolside and mountain views. The menu boasts a number of gluten-free and vegetarian offerings, and the smoke-free property offers a forward-thinking spa menu too, for your next wellness retreat or getaway.

What we like: the secluded villas each have a private patio, claw foot tub and outdoor fire-pit. The hotel also offers a number of personalized experiences, from delivering chilled champagne, fresh flowers and fresh fruits to your room, to curating a day-long bike trip around Palm Springs complete with two bikes and a picnic basket packed with lunch, wine and picnic blanket. See reviews and book here.

The country’s premiere country music festival takes place right after Coachella, and this year’s lineup features “American Idol” host Luke Bryan, Sam Hunt and Jason Aldean as headliners, along with Diplo, who will be playing the first-ever Stagecoach after party on Sunday night. Tickets are still available for the festival on re-sale sites like Stubhub.

Where to Stay: Sparrow’s Lodge

Sparrow’s Lodge bucks the mid-century modern styling of its Palm Springs contemporaries in favor of rustic, barn-style accommodations with decidedly modern indulgences. While you won’t find a phone or TV in your room, the adults-only retreat does feature private patios, rainfall showers, and deep, horse trough soaking tubs (more relaxing than it sounds) in most rooms, along with a health-minded daily breakfast served in the Barn Kitchen that consists of fresh fruit, yogurt, granola and toast.

Originally built in 1952 by MGM actor Don Castle and his wife Zetta, the hotel says it was was one of the “original resort getaways for Hollywood elite,” and it’s rumored that “Bewitched” actress Elizabeth Montgomery had her first marriage at the property’s Red Barn. The Lodge was fully restored in 2013. See reviews and book here.

VarietySPY editorial products are independently selected. If you buy something through our links, PMC may earn an affiliate commission.