Awkwafina at Variety’s Power of Women: ‘The True Power We Possess Comes Through Our Stories’ 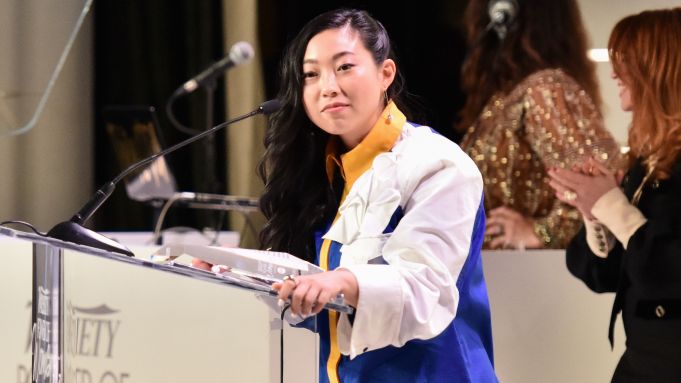 Awkwafina spoke about the ability of music to change lives and inspire young people at Variety‘s Power of Women luncheon Friday at the Beverly Wilshire hotel.

The “Crazy Rich Asians” and “The Farewell” star was honored at the event sponsored by Lifetime for her support of Building Beats, which provides equipment, workshops and mentoring for minority and low-income youth who want to go into music production but don’t have the resources.

She was introduced by “Russian Doll” co-creator and star Natasha Lyonne, who’s also one of the directors on Awkwafina’s upcoming Comedy Central series, and Awkwafina began by joking that they “really sound alike.” “It’s very confusing when we’re on set,” she said. “No one knows who’s talking.”

She brought it back to her charity by talking about her viral YouTube hit “My Vag.” “I was a kid from Queens, I was raised by my grandmother and I remember the feeling of not having any road map to my own destiny, coupled with the intense urge to pursue something that made me feel free,” she said. “After my YouTube video, ‘My Vag,’ went viral, I then proceeded to record, produce, mix and master an album sitting on my bed. If it wasn’t for my intense love affair with music, I would not be here today.”

“Sometimes I don’t feel power, and I’ve talked a lot about imposter syndrome,” she concluded. “I’m literally a walking definition of imposter syndrome. I think that’s something we all go through sometimes. But I’ve come to realize that the true power we possess comes through our stories, and how they influence others to believe in their own. The power in my story, a girl with the voice of a pro wrestler and the body of Pikachu — the fact that I am standing before you means that someone else can do it too.”

The other Power of Women honorees being feted on Friday are Jennifer Aniston, Dana Walden, Mariah Carey, Brie Larson and Chaka Khan.