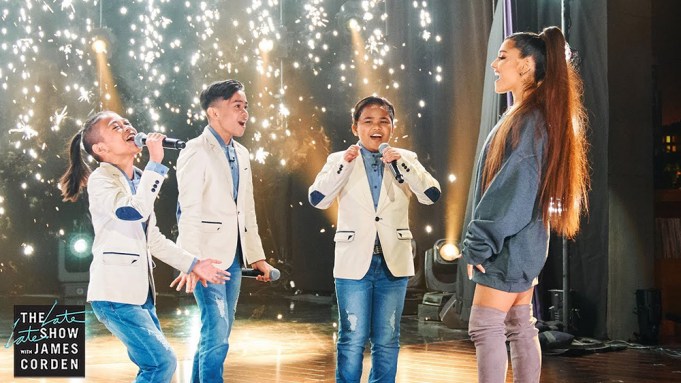 The Filipino boy band TNT Boys gained an extra member Tuesday night when pop-star Ariana Grande made a surprise appearance during the group’s performance on “The Late Late Show With James Corden.”

Corden, who also hosts “World’s Best,” invited the singing trio to perform “Dreamgirls'” anthem “And I Am Telling You” on the “Late Late Show.”

Before taking the stage to belt out a powerful rendition of the ballad, the group gushed about their obsession with Ariana Grande.

“I love Ariana Grande’s voice, and I love her attitude,” Concepcion said to nods from his fellow band members. Meanwhile, Grande stood backstage watching the interview from a secret television screen, teasing her own on-screen appearance.

The boys’ performance featured their impressive vocal range alongside numerous three-part harmonies and complicated vocal rifts. But as they hit the song’s refrain, Grande also hit the stage, breaking up the group and bringing Concepcion to his knees.

“I’m obsessed with you guys. You guys are so incredible,” she said after the performance. “That was so beautiful.”

Later in the show, Grande also sat down with Corden to discuss becoming the first solo artist to have the top three songs in the country at the same time.