“If Only,” the song Andrea Bocelli recorded with Dua Lipa for his 2018 album “Si,” sat untouched in Filippo Sugar’s drawer for eight years. Sugar, whose family-owned Sugar Records has a deal with Universal Music Group via Decca U.K. to handle Bocelli’s recordings, was sure the song would work for the Italian tenor. They just needed the right opportunity.

“If Only” came from two of his publishing company’s writers, Lucio Quarantotto and Francesco Sartori, who had put Bocelli on the international map with “Time to Say Goodbye” aka “Con Te Partiro.” Six years after Quarantotto’s death, the time was right.

“We have always looked for songs, even if we were working on different types of projects, ‘Incanto,’ ‘Cinema,’ ” Sugar says. “We are looking for songs that have melodies that are as significant as possible. It’s difficult to do better than what Puccini did — Andrea will say it’s impossible. I try to think that it’s still possible, but it’s very hard.”

The Dua Lipa duet was the first single and video released to promote “Si,” Bocelli’s first album of all new material in 14 years. Variety is honoring Bocelli with its inaugural Achievement in Intl. Music Award on Dec. 18 at his Madison Square Garden show.

“The U.S. really galvanized his audience, stimulated all those people that had bought records and gone to concerts and watched these videos,” says Graham Parker, president, U.S., Universal Music Classics. “ ‘Si’ presented the opportunity for Andrea to find new audiences as well. That voice is kind of pan-generation — starting with the A&R and with all the marketing, we did everything we could to try to find opportunities and new audiences for him. We really did have an ambition for it to be a No. 1 record and was thrilled that we achieved that goal.”

Key to getting that No. 1 in. the U.S. were three factors: A concert ticket bundle for his 2019 tour dates; the video with Dua Lipa; and a story behind the album that included Bocelli’s son Matteo and a duet that made its way into a Disney film.

Since the release of “Andrea” in 2004, Bocelli has released 10 studio albums of music connected by themes — composers, movie music, Neapolitan love songs, etc.  This time, he says, “no theme.”

“I always guide myself with the sensations that I feel,” Bocelli tells Variety through an interpreter during a busy media day in Miami. “I did songs that would give me emotion, pure emotion. That’s the focus of the music.”

Work on “Si” began in 2016 with an extensive search for new songs followed by the recording of demos. The goal from day one was to bridge the classical and pop worlds — producer Bob Ezrin (Lou Reed’s “Berlin,” Alice Cooper, Pink Floyd’s “The Wall”) says, “the remit I was given was they wanted to make the greatest classical record of all time with all new material” — which led to guest appearances from Ed Sheeran on the Italian/English collab “Amo Soltanto Te,” and Josh Groban on “We Will Meet Once Again.” They recorded an Italian version of “Danny Boy” and pop songs that stretched far beyond his early repertoire.

“The interesting thing is that Andrea is in love with the idea to record his voice because he knows that his voice is not forever,” Sugar says. “That’s a wonderful advantage for us because he’s open-minded, even sometimes when he’s not really sure about something.”

New music was being requested by fans, says Universal Classics and Jazz CEO and president Dickon Stainer. For the label, he says: “We wanted to ensure that we had really excellent new songs that had international appeal. I also think, from the point of view of the songs and styles, that they not try to repeat [Bocelli’s work] with arias or traditional Italian songs.”

The cornerstone of the album — and the track that Universal has used to reach as many audiences as possible — is “Fall on Me,” written by A Great Big World’s Ian Axel and Chad Vaccarino. Bocelli recorded the song with son Matteo; UMG released it in Italian, French, German and Russian versions, plus a Chinese spin with A-Mei.

The song arrived at Sugar’s office via Universal U.K. A&R executive Ross Cullum in the form of a demo featuring a Bocelli soundalike and female pop singer in her 20s. It made its way to producer-arranger Ezrin, who had been brought in to give some of “Si’s” tracks a new approach.

“When I listened to it — it was sent to me all in English — it just didn’t work for me in terms of the ethos of the piece,” Ezrin says. “I thought it was deeper than a regular love song. What I did hear in the lyric was the possibility of telling a slightly different story, which instead of being a woman who was unsure of love and a man reassuring her in some way, that it becomes a young man who is unsure of love and life and whose father comes to him from far away, perhaps from beyond the grave, and tells him that he’s going to be OK.

“And with a variation in the lyric, which the songwriters were gracious enough to do for us, the whole thing just came together magically.”

Enter teenage Matteo, who had neither studied music nor performed.

“It was something out of the blue,” the elder Bocelli says. “One day my son said, ‘Dad I want to tell you something. I want to try to sing.’ He had never sung in front of me, except maybe together [as a family.] I said, ‘OK, but you have to study. Singing is hard and you have to study, even more so than any other art. It’s a precise technique that you need.’ And he started studying.”

Adds Stainer: “It was outside his normal frame of reference, but it has the extra elements that gave us something just magical. It was the indefinable thing you hope you find when you’re making an album.”

Sugar calls “Fall on Me” “a very good example of a contemporary song that is perfectly fitted for the vocal of Andrea Bocelli.” It led him to employ Ezrin to handle the entire album and the Diamond Edition “Si Forever,” which was released in November and included new duets with Jennifer Garner and Ellie Goulding.

To provide a new sound behind Bocelli, Ezrin, who studied classical piano and composition as a youth, brought in John Metcalfe to arrange the orchestrations — the two had worked on Peter Gabriel’s orchestral album “Scratch My Back” — alongside Bocelli’s longtime collaborator, Thomas “Tawgs” Salter.

“I knew John to be somebody that had a unique way of writing for strings in particular because he’s a violist as well as the composer and arranger,” Ezrin adds. “He sees the orchestra from the center out, which is a very interesting point of view. And, and I love that sound.” (Reed’s “Berlin,” he notes, had an entire orchestra of violas and no violins.)

“We resolved to keep real rhythm sections out of it — there are no electric guitars or any of that sort of thing,” Ezrin says.

When it came to vocals, Ezrin became particularly enamored of Bocelli’s ability to lower his tenor into a baritone range. “I think it’s rich and powerful, so every chance I had to use that, I took it.”

Marketing for the album started four months before the release of “Si” with a performance of “If Only” on “Jimmy Kimmel Live!” In the week leading up to “Si’s” release, Bocelli and son performed “Fall on Me” on “Dancing With the Stars,” “Good Morning America,” “The Late Show With Stephen Colbert” and “Live With Kelly and Ryan.” Post-release, Bocelli sat down with Gayle King on “CBS This Morning.”

“I felt like we really touched the suites of marketing opportunities for Andrea and it just reconnected with his audience,” Parker adds. He also did a Facebook Live session alongside his son in 2018; he did another one just prior to the release of “Si Forever.” Bocelli follows the release of “Si Forever” with 13 tour dates in the U.S. in December and February, performing a program of arias, Italian songs, material from “Si” and songs that Sugar says are now standards.

“We always tried to look for songs that can be done in a classical context with a big orchestra,” Sugar says. “If you think about it over the years, at least 10 songs in his career have become classics, all written in the past 25 years. And I think ‘Fall on Me’ is one of the songs that is also a classic. I think this makes him quite special in the classical world.”

Andrea Bocelli and his son Matteo’s “Fall on Me” made its big-screen debut a week after the song was released on the album “Si.”

The duet is the end credits song on Disney’s “The Nutcracker and the Four Realms,” the music of which brings together some of classical’s biggest artists: Bocelli, conductor Gustavo Dudamel and pianist Lang Lang. The film has benefitted from the song being recorded in multiple languages — Italian, French, German, Spanish and Russian — giving viewers around the world a chance to hear Bocelli in their own language.

Generally speaking, though, uses of Bocelli’s music in film and television have served as a contrast to the other music or the action on screen.

Among TV series, HBO’s “The Sopranos” used Bocelli’s “Con Te Partiro” in three episodes in its second season and once in season three.

That song, Bocelli’s first hit, was done in English as “Time to Say Goodbye,” is also the most synched of his recordings. It’s often performed on screen,  most recently in an Octber episode of “Single Parents.” It’s been performed twice on “The Simpsons.”

Will Ferrell movies have had the most famous placements:  “Por Ti Volare” appears in 2008’s “Step Brothers” and “Con Te Partiro” is part of the hilarious opening of “Blades of Glory” from  the year before.

The Andrea Bocelli Foundation is using music to empower people in communities affected by poverty, illiteracy and illness, their latest effort being the creation of regional choruses.

In November, the foundation announced the creation of Voices of the World, a program aimed at disadvantaged children and youth in vulnerable regions. In development since 2014, a team from multiple disciplines have designed a music education system that emphasizes social inclusion and personal self-expression.

The results can even be heard on his album “Si Forever.” The 60-member children’s choir Voices of Haiti, created by the foundation in Port au Prince with local partner Foundation St. Luc, sings on “Dormi Dormi,” Bocelli’s duet with Jennifer Garner, and “Gloria the Gift of Life.” ABF and Foundation Saint Luc launched a music education project in schools that 12,000 students participated in, 60 of which were chosen for the choir.

The choir also accompanied Bocelli at performances at the United Nations, Teatro del Silenzio, the Lincoln Center Global Exchange and a general audience with Pope Francis. 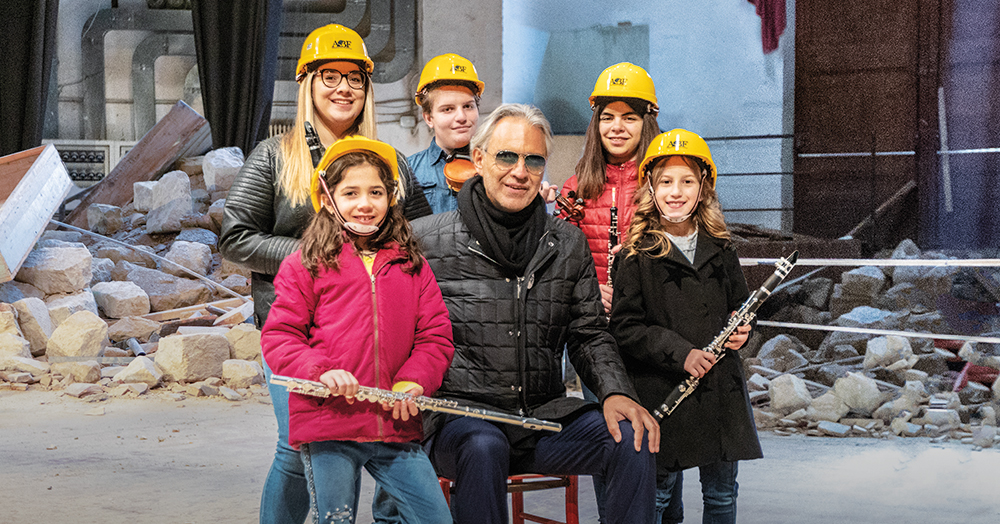