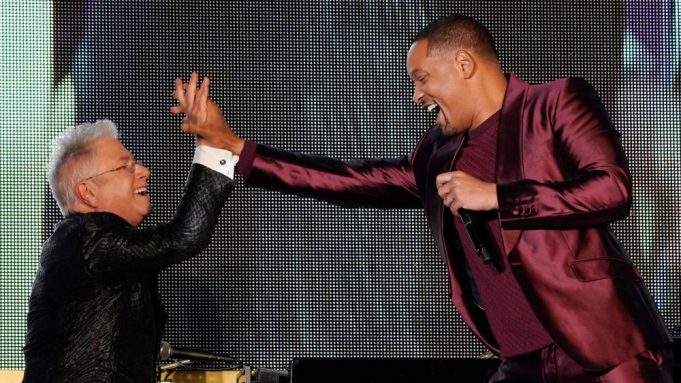 One of the biggest moments in Disney’s new live-action version of its animated classic “Aladdin” comes when Will Smith is revealed as the Genie, who emerges from a magic lamp to sing “Friend Like Me” — a make-or-break moment in audiences accepting him taking over Robin Williams’ role from the 1992 original.

While another song from the animated film, “A Whole New World,” wound up winning the best song Oscar, “Friend Like Me” remains the most hilarious sequence in the “Arabian Nights” fantasy. Figuring out a way to put his spin on it without too radical a departure unlocked the entire role for Smith.

“The music is how I saw my way in to be able to play the Genie,” Smith told Variety earlier this week. Referring to the London recording sessions, he recalled, “I noticed that it was in the BPM [beats per minute] range of old-school hip-hop. So when I started playing with it, it was like, oh man, this lends itself to a tempo and a flavor that I really understand. That showed me how I could pay homage to Robin and not change the song so much, so people would have the nostalgic value, but also be able to come up with my own flavor.”

Surprisingly, Alan Menken, the original composer and music director of the new film, never even met Smith until the film’s press junket a week ago. “Will came in knowing the musical influences he wanted to add, and the attitude he wanted to have,” Menken told Variety. “We all just stood back and let him do his thing. He really made it his own. We went in and supported it with the arrangement afterwards, and I’ve grown to love what he’s done.”

“Friend Like Me,” with its lyrics by Menken’s “Little Mermaid” and “Beauty and the Beast” partner Howard Ashman, is one of five songs from the animated version that were reinterpreted by the cast in director Guy Ritchie’s new version.

Smith also sings “Arabian Nights,” the opening song that was met with controversy in its original 1992 version when Arab-Americans criticized it as racist (for the line “where they cut off your ear / if they don’t like your face / it’s barbaric but hey, it’s home”) and was rewritten for subsequent releases (“where it’s flat and immense / and the heat is intense / it’s barbaric but hey, it’s home”).

For the new, much longer version of “Arabian Nights,” Menken collaborated with hot songwriters Benj Pasek and Justin Paul, whose recent track record includes the Tony-winning score for “Dear Evan Hansen,” the Oscar-winning lyrics for “La La Land” and the Grammy-winning songs for “The Greatest Showman.”

“The idea was always that Guy wanted to have the camera fly over the ocean into the city and wind through the streets and bazaars,” says Pasek. “It was important to the filmmakers that Agrabah was not one specific culture or country, but a diverse city, a melting pot of many cultures and languages, and that’s referenced in the lyrics.”

Menken (whose eight Academy Awards are all for animated Disney musicals, including song and score for “Aladdin”) invited Pasek and Paul to go through all of Ashman’s original notes and lyrics for the film. “We got to really immerse ourselves in that world and try our best to be an extension of the instincts that he was following,” Pasek says.

Their biggest assignment, though, was to write a new song for Jasmine, a female empowerment anthem along the lines of “Let It Go” (an Oscar winner for an earlier Disney animated hit, 2013’s “Frozen”). “Jasmine needed a song that, in order to be important in our contemporary world, had to do with finding her voice,” Menken explained. “These Palace Walls,” a Jasmine song from the Broadway version, didn’t meet those needs.

“The Jasmine in this movie was going to become much more three-dimensional, flesh-and-blood, and she needed a song to reflect that,” Menken adds.

“It was definitely something we were excited about,” says Paul. “The idea of someone not having a voice, being told they’re better seen and not heard, and this moment where she finally takes power in her own hands and comes to her full purpose, seemed like a great way to express how she’d be feeling and what she might say.”

But, as Menken put it, “We had to really lay some dramaturgical pipe to support this. If we bring it in as a complete song too early, it’s too big a statement; at the end, it’s really too late because we haven’t set it up. So we decided to divide it into two parts.” Naomi Scott as Jasmine sings “Speechless” in two segments in the film — somewhat wistfully in its first half, fully empowered late in the film.

Pasek and Paul, despite their massive success in the past four years, consider Menken a role model. “Some of the first movies we ever saw were ‘The Little Mermaid’ and ‘Beauty and the Beast’ and ‘Aladdin,'” says Paul. “His music was part of our DNA growing up. When we were asked to work on some new material with him, I think we felt thrilled and terrified and excited and really intimidated.

“We were astounded how collaborative he was,” Paul adds. “It was such a surreal thing to be there with our hero, and see him wanting to work with us as equals.”

Menken told Variety that he is beginning work on the next live-action translation of one of his animated classics, “The Little Mermaid,” whose Menken-Ashman songs will be supplemented by new songs with another Tony winner, “Hamilton” auteur Lin-Manuel Miranda as lyricist; Rob Marshall (“Mary Poppins Returns”) is on board as director. “With Rob directing, I’m confident that everything that worked in the original is going to be guarded very carefully,” Menken said.