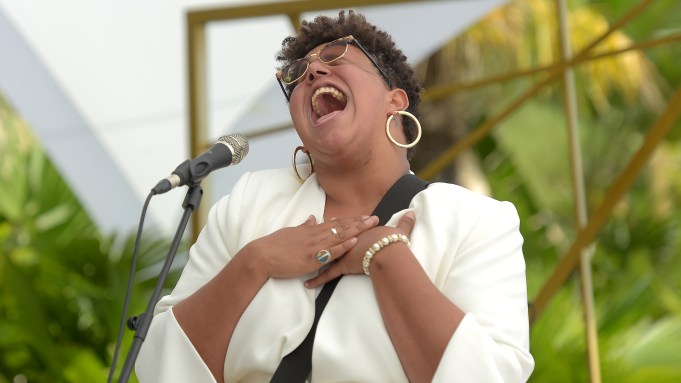 Like many women in the music industry, Alabama Shakes front-woman Brittany Howard was told consistently throughout her career that she didn’t have a shot at success due to her gender. But as the leading guitarist and vocalist in the iconic Alabama-based rock band — and with four Grammys to her name — Howard knows that women can certainly find success in the industry — as long as gatekeepers begin to trust them.

During a private villa panel discussion hosted by Citi and Live Nation, Howard and Citi Bank’s Jennifer Breithaupt spoke to Variety’s Shirley Halperin about increasing gender parity in the music scene, and the #SeeHerHearHer campaign which works to increase representation in the industry’s marketing space.

“Right from the get-go I had a really hard time because I was a woman and I wanted play guitar and I wanted to front the band,” Howard noted about her early musical career, which began taking shape when she was a teenager after hearing her first band play when she was 11.   “Nobody wanted nothing to do with it. They said I look strange, too tall. Wrong color skin to be playing rock n’ roll music. Nobody didn’t want nothing to do with me because they were like, ‘This is never going to get off the ground.’ That’s what they said.”

The “Don’t Wanna Fight” singer also explained how she continued to remain resilient, which enabled her to find the success she’s found in the 10 years since Alabama Shakes was founded. ”I did it my way,” she said, adding, “I was never gonna give up and I was never gonna listen to what anyone else had to say about what I wanted to do.”

Howard’s universal experience is one of the main reasons Breithaupt, the global consumer CMO at Citi, helped launch the #SeeHerHearHer campaign, which in collaboration with the Association of National Advertisers, works to increase awareness around gender parity in advertising and the representation of women in the music industry.

“At Citi, music has been a big part of our DNA for years and we took a step back this past year and we thought, ‘Well why can’t we help [launch] #SeeHerHearHer? Why can’t we be that brand that helps push that out the door? And so we said, we can and we should do that.”

Launched on March 8, the music-centered campaign is a subset of the #SeeHer campaign founded in 2016, whose initial mission was to achieve a 20% rise in the accurate portrayal of women and girls in media by 2020. At Citi, Breithaupt wanted to use #SeeHerHearHer to focus on female musicians specifically because “music is such an incredible component of our storytelling.”

“So for me, when I’m thinking about that as a brand marketer, as a woman, as a fan of music,” she went on, “how can I use the platform that I have in working for a big global brand like Citi to really help women have their voices and their stories as part of that soundtrack?”

And as Howard launches into her solo career, currently prepping for her first solo record, the artist makes it clear that her work towards equality isn’t over unless she’s able to help other female musicians along the way.

“I think that’s a place to start talking with other artists, especially other bands that are male headliners, and just saying, ‘Hey  you know my friend, check her out… She’s really talented she’s got a good chance!’ Howard said.  “It’s a societal issue first because, why aren’t female artists getting as much airplay or why aren’t they getting signed this much or why would a label say, ‘Well we have enough female artists right now’ but they would never say, ‘We have too many male artists’? And seeing behaviors like that and literally just somebody stepping in and saying, ‘Hey that’s not okay. Let’s check it out, let’s listen to it. Let’s give it a chance like we would everybody else.’”