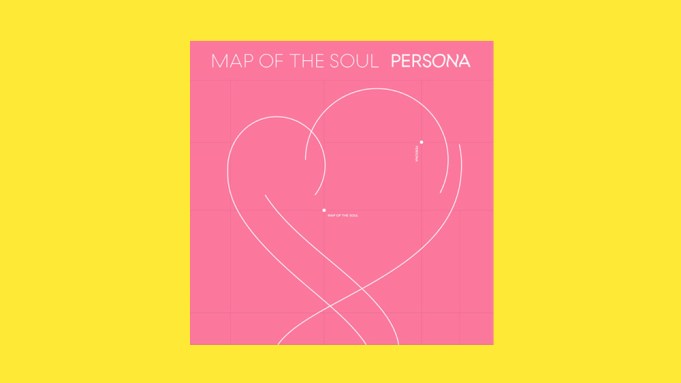 In 2013, BTS was just another Korean boy band signed to a small label that hardly anyone had heard of. Six years and a K-pop global explosion later, they are the most popular boy band in the world, which is why fans around the globe set their alarm clocks (or pulled all-nighters) to catch the global release of “Map of the Soul: Persona” at precisely 6 p.m. KST (2 a.m. PT/ 5 a.m. ET).

The 7-song album is taut musically and thematically (the group is a septet consisting of RM, Jin, Suga, J-Hope, Jimin, V, Jungkook), although things get into murkier territory lyrically. Fans of the group dig deep into the meanings behind the songs — a challenge for many, since the majority of their lyrics are in Korean — but the reasoning behind this album’s title, derived from “Jung’s Map of the Soul,” a study of Swiss psychiatry pioneer Carl Jung written by psychoanalyst Dr. Murray Stein, is unclear. Jung said that people inherited the collective unconscious of their ancestors and possess memories of which they’re unaware. What could this have to do with BTS?

Well, in Korean, there is a concept of “jung,” which doesn’t really have a direct parallel in English but describes an emotion that encapsulates the feeling of love and loyalty that people have for one another — which in this case the bandmembers feel for each other and their fans (collectively called ARMY). That sentiment is prevalent throughout “Map of the Soul.” Heady song titles like “Mikrokosmos,” “Jamais Vu” and “Dionysus” sound more like titles from a college syllabus, but the casual listener wouldn’t necessarily notice from the music of the group’s sleek, streamlined pop sound.

American pop star Halsey joins BTS on the highly-hyped single “Boy With Luv,” which the band will premiere live tomorrow on “Saturday Night Live.” An homage to 2014’s “Boy in Luv,” the new song deconstructs their then adolescent mindframe. Halsey’s vocal captures the giddiness of being in love, while the lyrics address the relationship the group has with its ARMY: “I’m flying high in the sky with the two wings you gave me,” with the wings referencing the title of their second album. Likewise, they’re hopeful and optimistic on the Ed Sheeran collaboration, “Make It Right,” with the Brit adding some trademark melodic flavor to the ballad.

“Intro: Persona” is a solid showcase for the group’s leader, RM. His flow eases back and forth between Korean and English. “Who the hell am I?” he asks, but his delivery says it’s more of a rhetorical question.

On the funky final track “Dionysus,” the group asks, “Are you ready for this?” The answer probably came at precisely 6 p.m. KST today.