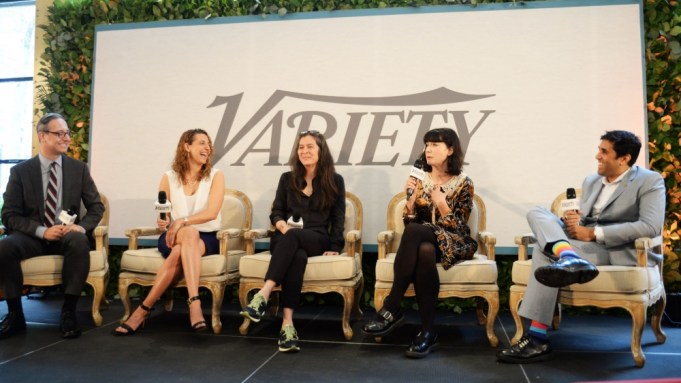 “Jagged Little Pill” wasn’t originally written with Broadway in mind — but the songs on Alanis Morissette’s smash-hit 1995 album do exactly what good musical theater songs should do, according to the upcoming show’s creators and producers.

The team explained why on Variety‘s theater podcast, “Stagecraft,” in an episode recorded live at Variety‘s second annual Business of Broadway breakfast. Book writer Diablo Cody, director Diane Paulus, and producers Eva Price and Vivek J. Tiwary were all on hand to offer a glimpse of the show’s journey toward the Broadway run that begins previews on Nov. 3.

“It struck me how theatrical these songs were,” Tiwary (“American Idiot”) said of Morissette’s tunes. “The songs are recorded to have a feel that is very epic in scope and sound … but the message is small. The message is like: ‘Here’s what happened to me one summer. Here’s what’s going on with me and my parents. Here’s what happened with me in a relationship that just ended.’ That, to me, is the definition of a great musical theater song. It plays to the back of the room, but makes you feel like you’re right inside one person’s head.”

Meanwhile, Paulus (“Waitress,” “Hair”) described being struck by the theatrical potential she sensed in the album. “Everybody knows [album anthem] ‘You Oughta Know,’ but then you listen to every song and you think, ‘Oh my God, it’s a range of emotion,'” Paulus said. “Alanis is not just an angry rocker chick.”

These tunes from the 1990s are also remarkably relevant to today’s world, according to Price. “I believe in the stories that this prescient woman wrote 25 years ago, because they’re speaking to today in a way that nothing else has,” she said.

“Jagged Little Pill” is the first theater project for Cody, the screenwriter (“Juno”) who penned the musical’s original book. She’s loving the change in medium. “As a writer, the opportunity to do things over and over and over again is a thrill. I love it,” she said.

She added, though, that she doesn’t love watching her own work onstage: Back during the show’s premiere run in Boston, she said, “I would just walk around in the back [of the auditorium], and if I couldn’t handle it, I would just put my head down and pace. The actors are like, ‘You look f—in’ weird back there!’ But you know, you gotta do what you gotta do to survive the process!”