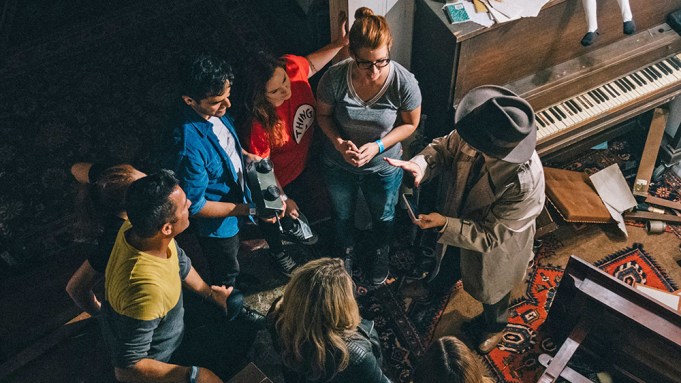 “The Blue Blade,” created by Delusion founder Jon Braver and backed by immersive entertainment firm The Great Company, has been consistently booking sold-out performances since last fall. The spring remix, which bows Feb. 14, will include new plot twists, artifacts, actors and, of course, new challenges for each audience of eight to take part in. The basic “Indiana Jones” meets “Blade Runner” story about a renegade historian who has stolen an artifact to manipulate time is still intact but with new surprises in store.

“We’re really excited about the extension of this sixth story in the Delusion Universe,” Braver says. “This is the first time we’ve extended a show beyond the fall season. We’re confident this show in particular can transcend any one season. Plus, changes are afoot, as Prof Evelyn Lowell has manipulated time in ways she could never have imagined, which means the show will offer something new and exciting for those who have seen it before as well as brand new Delusionals.”

Delusion has been producing interactive shows each fall in the L.A. area since 2011 at various locations around the city. The current show takes place at Cafe Club Fais Do Do, where food and drink are available before or after the show for an additional charge.

About 40 actors take part in the show, with 15 working each night. “Some roles are double cast because the format of the play is that every 20 minutes a new show starts, so there are three plays going on at one time,” Braver explains. “We do 15 shows per night. So, yeah, it’s a grueling show for them. They keep going for five hours. There are little breaks in between, but it takes a special actor to do this.”

Braver stresses that the show is not an escape room. “This is a play. At it’s heart, it’s a moving play.”

The show will run Thursday through Sunday nights from 6:40 p.m. to 11:40 p.m. through June 30. Tickets start at $95 and are available on the Delusion website. Corporate and group pricing is available, as well as a VIP package that includes a behind-the-scenes tour. The shows tend to sell out quickly, but Delusion also offers a wait-list for those who show up on a given night and fill-in for no-shows.