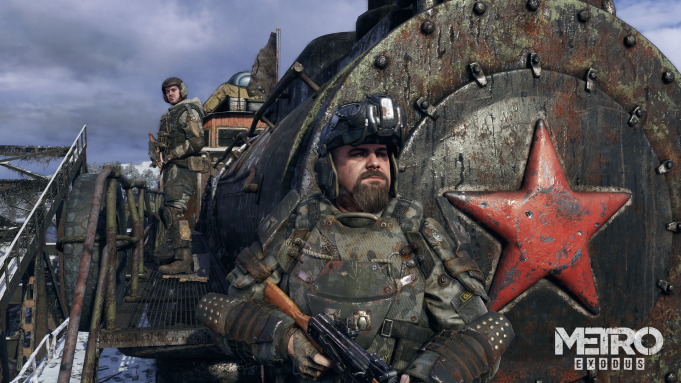 At first glance, it might appear as if “Metro: Exodus” has lost touch with what made the “Metro” series special.

The original game in the series, “Metro 2033,” was directly inspired and named after a Russian sci-fi novel, but, by “Exodus,” the Metro game series has shed the plot of the novels and gone its own way. Mechanically, “Metro 2033” made a name for itself with demanding survival gameplay and unique gameplay ideas like using bullets as both ammo and money. “Exodus,” in many ways, feels less risky than its predecessors: It isn’t quite an open-world shooter, but alternates between large explorable spaces and windy linear paths, both of which feel familiar to fans of immersive sims such as “Deus Ex” or Arkane Studios’ “Prey.”

Yet while it speaks in a language that’s more familiar to a certain kind of modern player, “Exodus” feels no less interesting or eccentric than the games it came from. It is a grueling exercise in resource management where you’ll curse yourself over every missed shot, set against a beautifully bleak world out full of nuanced stories, great and small. By adopting a more open format and taking the series to new places, developer 4A Games found an even more compelling version of the vision that’s made it interesting all along.

“Exodus” returns to the life of Artyom, explorer and defender of the people living in the Moscow subway in the decades since nuclear war decimated the country. Without going revealing too much of the plot, Artyom and the rest of his squad of security officers, the Spartans, get on a train and set out in search of life outside Moscow.

It’s a grand departure that opens the door for the series’ aforementioned shift to larger areas and more open-ended gameplay. The game is still broken up into levels by train stop, but many of them are wide-open environments with many missions, some of which are optional and can be approached from any angle.

Exploring “Exodus”’ post-apocalyptic Russia is, in a word, harrowing. Every place you travel is chockful of mutants, bandits, and environmental hazards, any of which can kill you easily if you aren’t careful. The myriad craft materials and small amounts of ammo you’ll find by scouring every nook and cranny feel like they’re barely enough to get you from point a to point b. If you’re thorough you will get enough to keep crafting ammo, health packs, and filters for your gas mask, among other things, but when a fight goes poorly you may look at your supplies and wonder if you’ll have what you need to continue.

The game’s aesthetic enhances that daunting feeling that haunts you throughout “Exodus.” Many of the places you visit feel brutally inhospitable, dressed in muted tones and populated with ugly, often gross enemies. That makes it a surprisingly refreshing departure from the world players generally expect, even in post-apocalyptic scenarios. Most things you see and do help build up a general sense of hopeless and futility, from scavenging for measly bits of crafting supplies, to finding that the new settlers you met aren’t as friendly as you’d hoped. All of this comes together to paint a vivid portrait of a world where every life is constantly on the brink of collapse. It isn’t pleasant, per se, but it is intriguing.

That synchronicity between the game’s mechanics and aesthetics can be a double-edged sword, though. While you are traveling to desert, cities, and forests, you spend much of the game exploring in the dark: Whether you’re underground or traveling at night, light can feel just as scarce as bullets. Even when you have light, though, the darkly drawn game can make it hard to find crucial details that help you find your way forward. It is extremely frustrating to get hung up because you walk past a switch or lever, especially at times when your air is in limited supply.

“Exodus” doesn’t set itself apart by deviating from post-apocalyptic cliché — on the contrary, it is full of cannibals, gangs of oil-obsessed motorists, and ideologically driven cults. Instead, it leans into these ideas and gives them you the ability to understand them, both through dialogue and plot, as well as extra-narrative devices like notes and audio logs that describe the situations you come across. The game’s best qualities shine brightest when you take the time to read, look, and dig deep into every little detail, so you should be prepared to take your time and absorb everything the world serves up.

This is especially true in the moments between the action. You will, from time to time, stumble upon a fellow traveler who would rather talk than fight. Often, they have a long and interesting story to tell that builds a relationship and expands your understanding of the world.  It can feel like character drone on, as many characters deliver a set of lines then pause before speaking again, it’s always worth taking the time to listen.

Similarly, “Exodus” breaks up many of its open-world sections with short story heavy breaks hanging out on the Spartans’ train, the Aurora. You can run through these segments quickly, hearing out the crucial story and moving on, but it is worth it to stay awhile, chat with your traveling companions, and observe how they behave around each other. Not only do you get to hear more interesting stories, but there are whole subplots that play out in the interactions between characters on the train. Moreover, learning about everyone in these quiet moments give their crucial story turns meaning and depth.

In general, “Metro: Exodus” feels like a big investment, but one that pays great dividends. It’s challenging, but like most challenging games the struggle makes success that much sweeter. It requires close attention to detail, but every second you spend learning about the world makes the hours to come that much more fascinating.