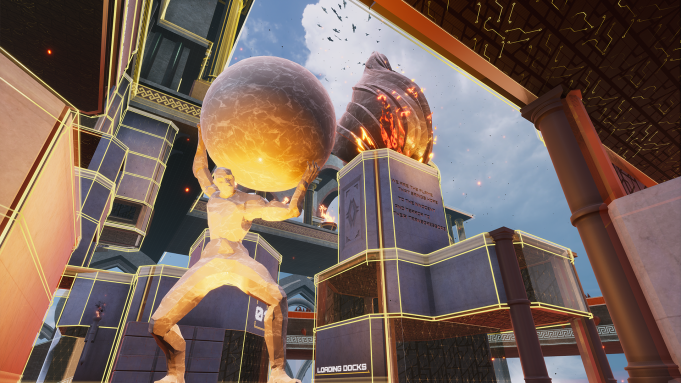 In the first minutes of “Crackdown 3,” players drop onto an island with a superhero-like private cop in their command, tasked with taking out a corporate boss who builds walls to keep refugees out of the city. This is not the old “Crackdown.”

The old “Crackdown” dealt a super satire of police states, where gang violence reached an extreme, and only shoot-outs in broad daylight – for justice – could stymie inner-city uprisings. Things changed.

There’s still the burly, privatized police force, The Agency. The Agency marches onto the island of New Providence, adorned with HDR-sizzling night skies, pushing “”Crackdown” toward a confusing, centrist podium. “Crackdown 3” is proud to hire killers as heroes (“Skills for kills!” they shout), now taking on maniacal corporate goons post-power blackout instead of gangs.

That corporation (TerraNova) spills a toxic, narcotic chemical into New Providence’s waters. It placates citizens, along with the projected propaganda. It’s a profit-above-all attitude. The resulting income equality is not only mentioned in dialog but shown. Massive TerraNova luxury suites stand above low-income favelas. TerraNova built their high-dollar superstructures on elevated platforms above the poor. No need to touch let alone mingle with the impoverished.

“Crackdown 3” makes The Agency a righteous hero. Before, they took on an anti-hero performance, a conventional spin on “Judge Dredd.” It’s an interesting transformation for “Crackdown,” dealt with a heavy-handed, anti-corporate mindset. That’s derivative in contemporary media. It seems implausible anyone chose to live in New Providence, poisoned water and blatant propaganda blaring over loudspeakers (which can be hacked to push Agency propaganda so no one wins). Then again, someone in real-world power does indeed want a wall to keep out refugees and people show support, so who knows.

By 2019, the open-world genre has expanded. Too fat, bloated. “Crackdown 3’s” ultimate simplicity then is its hallmark. New Providence lacks grandiosity (although visual design gives sections of the city identity). Missions lack quantity. Scale never impresses. So be it, since navigation is pure bliss. Ruining that with endless, disruptive side missions would be too great a sin.

Instead, “Crackdown 3” has pep, an enthusiasm for exploration and blunt candor when amid violence. It’s too small to grow mundane and too fast to lose its wonder. The city serves as a jungle gym, where puzzles involve jumping, leaping for a chance at glowing orbs – to increase jumping skills to reach ever further orbs.

Consider “Crackdown 3” an excitable eccentric, oblivious to the pressures around it, jolly when doing its own thing with an undeniable identity. This truly is raw “Crackdown” in play, growing in satisfaction as leaps become more dramatic, or punches turn unstoppable.

By happy accident, sheer luck, or exaggerated expectations of open worlds, “Crackdown 3” works by doing the minimum.  And these days, the minimum feels like a reprieve.