By design or not, 'The Division 2' is political. 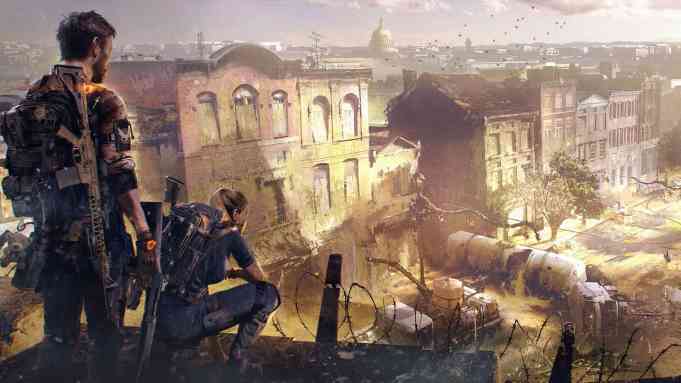 “The Division 2” does have plenty of elements aligned with typical Clancy fiction. It’s fetishistic about weapons. There are small elements of political intrigue and absurdity – one side mission concerns the Declaration of Independence’s rescue. The setting is Washington D.C. and the President may or may not be dead.

But then comes that wave of Tucker Carlson. Carlson’s hyper-conservative ‘news’ show treats white men as victims, said gun laws represent class warfare on the day of a school shooting, and treats Republicans – positively – as ferocious tigers. Carlson’s rants appear to have inadvertently birthed the world of “Division 2.”

In “Division” lore, before he disappeared, the President signed an order activating a group of government-funded nationalists to legally gun down looters in hopes of restoring order. The White House is a base of operations, turned from an American symbol into a weapons stronghold. Subtle.

“There’s a new sheriff in town,” spouts the dialog. That’s referencing an absurdly silent protagonist draped in camo with a swelling backpack fit for anyone who religiously watched each episode of Nat Geo’s Doomsday Preppers. An opening cinematic questions where you have your gun, and notes the goal is to “unite us.” Through guns. Unite us all in guns. So, so many guns. It’s enough to have Carlson frothing on air.

“Division 2” is the worst of ‘stand your ground’ laws and ‘good guy with a gun’ beliefs. Enemies wander the streets, guns outstretched sideways as they blindly fire like Hollywood’s abysmal thug stereotypes. There’s no narrative context for their actions, or why all of them willingly die for their cause – or what their cause actually is. They just hate innocents. That makes them easy villains to conservative eyes. They’re bad guys, the lot of them, and that’s all anyone needs to know. “The Division 2” may as well be Carlson’s primetime lead.

Never mind the concept remains absurd. The fantasy is that America is overturned by capitalist desires (a flu strain coated money at Christmas, ruined the holiday, and it’s time to fight to bring capitalism back), becoming this bizarre concoction of fantasy tropes and national reclamation.

If the situation is so dire, it’s questionable that so many full fuel containers lie strewn around. Is fuel not important? With dwindling resources, how do the roving gangs coordinate their attire? And where do these people keep coming from? Between those joining The Division, those in the gangs, and those staying home, it’s a wonder how anyone is left after the first few gun battles. Hundreds die in these shoot-outs; if funeral homes stayed open, every one of them is nearing the value of a corporate conglomerate.

It’s pale even in the standards of video game logic. Consider the idea of applying gameplay tropes familiar to sword-and-sorcery or sci-fi epics to what’s branded as a real world, near future story. Here, guns deal damage points. A holster can deflect X amount of said damage. A better holster, more deflected damage. One headshot deals 100 points, another 500. Of course, different enemies were born with thicker skulls, so they can withstand 500-plus points. This isn’t the context for those gameplay traits, but a bigger gun deals bigger numbers logic, thus the need to hunt for new weapons.

The reasoning lies in the inherent power fantasy. Tucker Carlson empowers those sitting on their couch with Bud Light yelling at brown people. Tom Clancy lured tech-minded absolutists who see military strength above all. “The Division 2” takes from both columns, reveling in the chance to extract better performance from weapons and make each shot a kill. In context, this is all quite brutal. Sociopathic? Probably. Blood isn’t excessive, but the sheer quantity and intended thrills of it all – for the sake of Democracy – turns this into a Wild West simulator. “Division 2” just replaces Native Americans with boilerplate gangs.

It’s remorseless violence, repetitious and ingrained after only a few hours.

It’s remorseless violence, repetitious and ingrained after only a few hours. “The Division 2” becomes a passive activity, blind to basic narrative technique and crass in form. No characters stand out, no personalities prove memorable, while the ultimate purpose seems to only instill an eventual tyranny.

The routine repeats with such infinity, and the death count so high, there’s no value here. Head to a location marked on a map, shoot, do a thing (blow something up, find an object, rescue civilians; all the same in application), then escape while readying for a few counter-attacks. There’s no variation in theme, style, or substance, and it is torturously overlong.

One of the common missions is to override propaganda, the same thing seen in the recent “Crackdown 3,” with the same ludicrous result – swap gang propaganda broadcasts for Division broadcasts. Put down your guns to pick up a gun and use guns against other people who won’t put down their guns. There’s a lot of guns, if the theme (again: non-political according to Ubisoft’s public statements) wasn’t already apparent.

Ubisoft’s prior Tom Clancy-licensed output consisted of “Splinter Cell’s” Sam Fisher or the international exploits of the Ghost Recon team. “Hawx” too, a wild, pure-Clancy flight combat sim with the explosive mark of Michael Bay. By comparison, “The Division 2” has no legacy. It exists because modern video games do this specific thing.

For Ubisoft, “The Division 2” is but a checkmark to compete against names like Activision’s “Destiny” or EA’s “Anthem.” Ubisoft cares not for the Clancy name (aside from market value), and although the author’s unflinching devotion to military intervention posed an issue, at least he established an identity. “The Division 2” represents the hyper-blandness of Tucker Carlson, a generic white guy spouting about how everyone hates you, making things great for themselves, and finding the absolutist solution to fix it all. With guns, primarily.