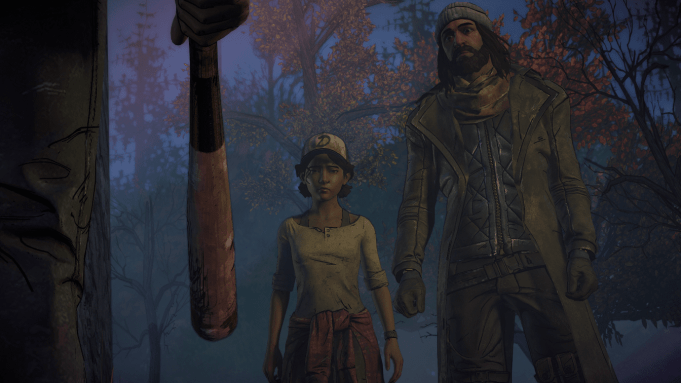 09The latest trailer for “The Walking Dead: The Final Season – Episode Three” hints at an appearance by a young Clementine and a long lost friend from the very first season of the series.

The trailer for “Episode 3 – Broken Toys” begins as Clem, still accompanied by AJ, wakes a tied-up raider foe with a bucket of water to the face. As AJ watches on, a now-hardened and adolescent Clem tortures the man with a lit cigar for information on the whereabouts of her people.

In a later scene a blood-soaked Clem and a group of cohorts walk among the walking dead, and remain unnoticed by the roving herd.

But the biggest surprise is an appearance by Lee, the protagonist of “The Walking Dead: Season One”. In the trailer’s final scene, a young Clem and Lee are in an open train car as it travels across the state. While Lee’s character remains off-camera, his voice and his use of nickname for Clem – “sweetpea” – suggest it is indeed him. It’s unclear how he will piece in to the story, but the scene appears to be part of a flashback.

“The Walking Dead: The Final Season – Episode 3” is the first game in the long-running Telltale series to be developed by Skybound Entertainment, a studio founded by The Walking Dead creator Robert Kirkman.

In the wake of catastrophic layoffs at Telltale Games, Skybound announced plans to take over development from the studio of the final episodes of the series. The studio is working with members of the original Telltale team to finish the story, the studio told Variety in October.

Telltale Games’ laying off of nearly all of its 274 employees without notice, severance pay, and less than a week’s worth of health care came just a day after two potential investors walked away from funding talks. Companies AMC and Smilegate were in discussion over investing into Telltale Games – a deal that Telltale management had been working on to save the company – only to drop out, leading to Telltale’s essential closure.