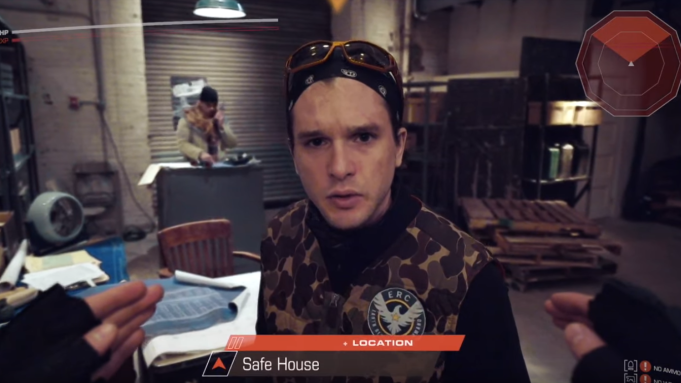 “Game of Thrones” actor Kit Harington took some time off from fielding questions about the end of his hit HBO show to portray an overly chatty NPC in “Saturday Night Live” over the weekend.

During the skit, Pete Davidson tries out a VR demo for the fictional “Earthwar 3,” where he plays a new “special divisions” agent during a zombie apocalypse. He’s eager to grab a gun and go kill some undead baddies, but he’s stopped by two NPCs (Harington and Mikey Day) who are more interested in chewing his ear off. They’re having a bit of a workplace spat and each one bad mouths the other to an increasingly frustrated Davidson.

“Earthwar 3” seems at least partially inspired by Ubisoft’s online shooter “Tom Clancy’s The Division 2.” The NPC costumes have a similar eagle logo and they constantly refer to Davidson’s character as “agent.” Both are set in a post-crisis setting, although “The Division 2″ doesn’t have zombies. It does have some chatty NPCs, though. Or at least it did up until Ubisoft released its first big update for the game on Friday. “Hey agent! Staff in the Base of Operation will now shout at the player less frequently than before,” the patch notes state.