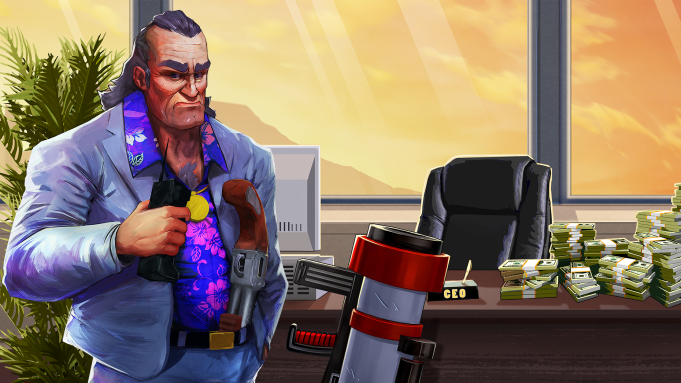 The PC version of “Shakedown: Hawaii,” an upcoming title from “Retro City Rampage” developer Vblank Entertainment, will debut on the Epic Games Store, according to a Tuesday press release.

When “Shakedown: Hawaii” was announced last summer, the Steam logo was proudly displayed in its reveal trailer. Now, it seems Vblank joined the list of developers opting to move to the Epic Games Store instead of Valve’s Steam Store.

The Epic Games Store offers developers a larger cut for their games, only taking 12% and leaving the remaining 88% of revenue for the game developers. When compared to Steam’s 20% to 30% cut, the appeal is obvious for developers.

Since its start in December, the Epic Games Store has not been completely without controversy. The lengthy and complicated refund process at launch soon garnered complaints from users, and resulted in a change from Epic. Still, it seems some PC players are not interested in using the Epic Games Store. When “Metro Exodus” was announced as a year-long exclusive for the Epic Games Store, some Steam users took to Reddit and other social platforms to express their disappointment.

Now, “Shakedown: Hawaii” is the next title to join the growing ranks of Epic Games Store-exclusive PC games.

“Shakedown: Hawaii” is a 16-bit open world action game that tasks players to build their empire by any means necessary. The game follows three protagonists: A CEO who’s trying to rebuild his business, his wannabe DJ son, and the CEO’s right-hand man.

“Build a ‘legitimate’ corporation by completing open world missions, acquiring businesses, sabotaging competitors, and ‘rezoning’ land,” a description for the game states. “The entire island is up for grabs, or at least, could be… with the right business model.”

After letting his business run itself for the past who-knows-how long, the CEO must learn modern day business terms like “sponsored content” and deal with dilemmas like whether or not streaming is really here to stay or just a passing fad. The trailer hints that the game will poke fun at some modern day business practices meant to cut corners and costs, and perhaps even task players to make these ethical/financial decisions.

In addition to PC, “Shakedown: Hawaii” is coming soon (Q1 2019 according to Vblank’s website) to Nintendo Switch, PlayStation 4, PS Vita, and Nintendo 3DS.