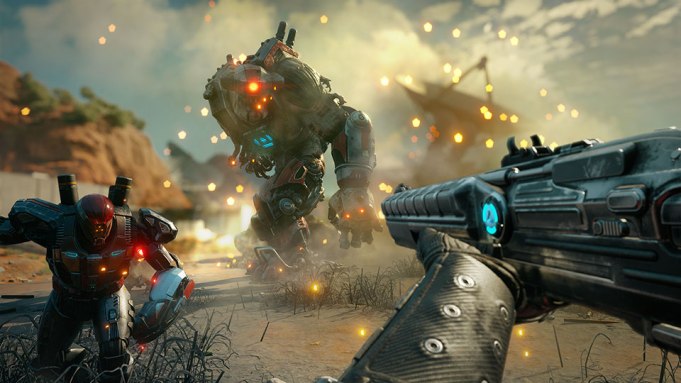 “Rage 2” appears to be shaping up nicely, embracing some of the unique design elements of the original id Software title, while amping up the use of vehicles, set-piece locations and general frenetic energy of play.

In the video above, provided to Variety by publisher Bethesda, we get a chance to check out the upcoming game’s weapons and abilities, a couple of the outposts found in the game, the use of the car and a hoverbike and finally, a showdown with a janky mech suit and its owner.

“Rage 2” is a post-apocalyptic first-person shooter from Id Software and Avalanche Studios. After an asteroid takes out 80% of the earth’s population, bloodthirsty gangs prowl the open roads and a tyrannical organization called the Authority rules. As a ranger named Walker, the player seeks payback after their home is taken and they’re left for dead.

Bethesda is promising a “carnival of carnage where you can go anywhere, shoot anything, and explode everything.” The game features an open world that players can seamlessly traverse, a variety of vehicles, and a faction system full of madmen, mutants, and monsters.

For more information about the game, which is set to release on PC, PlayStation 4, and Xbox One in later this year, make sure to read our interview with Tim Willits about the game’s story, design, and aesthetic.