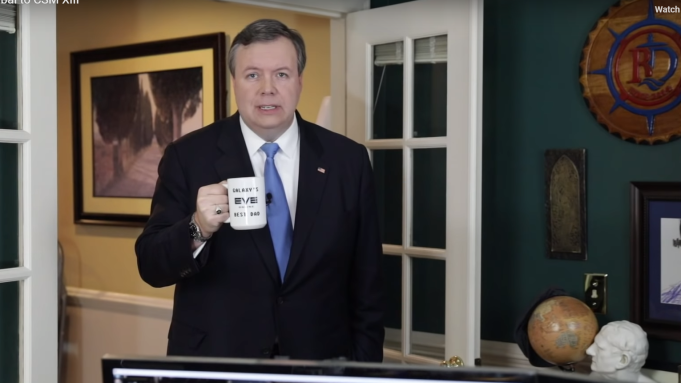 Former GOP election official Brian Schoeneman is fighting a ban from “EVE Online” in which he was removed for sharing proprietary information to conduct illicit in-game transactions, saying the charges are completely false in a Reddit post.

Schoeneman was elected to “EVE Online’s” Council of Stellar Management last year after campaigning using his real-life experience as a politician along with his extensive experience playing the game, even making a campaign video (above) in which he endorsed his qualifications using his in-game name, Brisc Rubal, which was spotted by Eurogamer.

In response, developer CCP Games have permanently banned Schoeneman’s accounts from the game and removed him from his position as a CSM representative.

“It is with great disappointment that I bring you the following news,” CCP shared in a post on the EVE Online website. “Brisc Rubal has been found to be sharing confidential information with a member of his alliance that was later used by another alliance member to conduct illicit in-game transactions.”

CCP clarified that the charges were brought against Schoeneman by the CSM.

Schoeneman, currently the Political and Legislative Director of the Seafarers International Union of North America, is disputing the charges.

“For those asking, I do not know why I was banned from ‘EVE’ and removed from the CSM,” Schoeneman wrote in a tweet on Monday. “I have asked for clarification and have received none. I categorically deny any wrongdoing and look forward to clearing my name and having my reputation restored.”

Hours after the tweet, Schoeneman wrote a long Reddit post about how he received an email informing him that the ban was for “a breach of the CSM’s non-disclosure agreement.” He wrote that there was no explanation of evidence or grounds for the charges, and stated that he did not provide any proprietary information given to him by CCP to him as a CSM member to anyone.

“As an attorney and a public figure in the United States, my ethics and reputation are regulated by a code of professional responsibility and statutory law, unlike CCP’s opaque community team,” Schoeneman wrote in a Reddit post, which he shared via Twitter on Monday. “As a licensed attorney for nearly a decade, I have never had a complaint filed against me. I have served in positions of public trust in the United States Government and have never had a complaint filed against me. The claims that I would risk my reputation by providing proprietary or otherwise confidential information to members of my own alliance for personal gain are false.”

Schoeneman continued by urging CCP to reverse year-long bans on two other players before explaining that he plans to fight the accusations.

“I will fight these false allegations,” he wrote. “[I will] restore my reputation and seek all avenues for recourse available to me for these reckless actions.”

CCP Games plans to make changes to prevent this type of infraction in the future, according to its post.

“Starting from the next summit,” the developer wrote. “We will impose a rule that prohibits electronics during CSM sessions and will take extra time to educate everyone about confidentiality, insider trading and general do’s and don’ts when it comes to operating under NDA.”