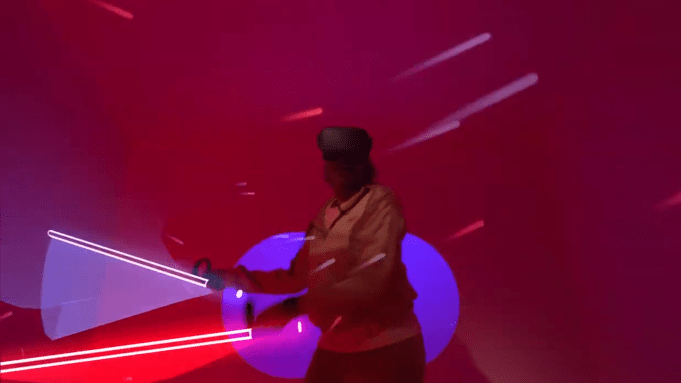 “Beat Saber” is coming to the Oculus Quest, Oculus announced Monday via Twitter.

The Oculus Quest is an all-in-one gaming system that includes a VR headset and two controllers. It doesn’t require any additional device, such as a PC or mobile phone or have any cables to restrict player movement. Oculus is expected to sell 1.3 million units of the Quest in 2019, according to SuperData. Coming this year, the device will cost $399.

“Beat Saber” is the popular VR rhythm game which tasks players to slash through beats in time with music.

Beat Games head of marketing Michaela Dvorak commented on the experience of playing “Beat Saber” on Oculus Quest in a press release.

“Playing ‘Beat Saber’ on Oculus Quest allows you to make literally any move you want,” Dvorak said. “You can easily add that extra dance move, and that feeling when you don’t have to watch out for any cables is priceless. I’m a big fan of Rift, but Beat Saber on Quest is a whole new level of experience! Visuals look absolutely stunning, gameplay is smooth and polished, and tracking is just great. Watching the game evolve on this platform was pretty exciting.”

The news comes after lots of teasing from Oculus ahead of the Game Developer Conference, which starts Monday in San Francisco. It’s well-timed, too, considering that on Thursday it was announced that “Beat Saber” has sold over one million copies.

Dvorak also hinted that fans of the rhythm game can anticipate an upcoming merchandise line for the game.

“For the future, I plan to bring our players a fresh new merch collection—complete with sports clothing that definitely comes in handy when playing ‘Beat Saber,'” Dvorak said. “We also have some pretty big plans in the works, so this will be an exciting journey. Stay tuned!”