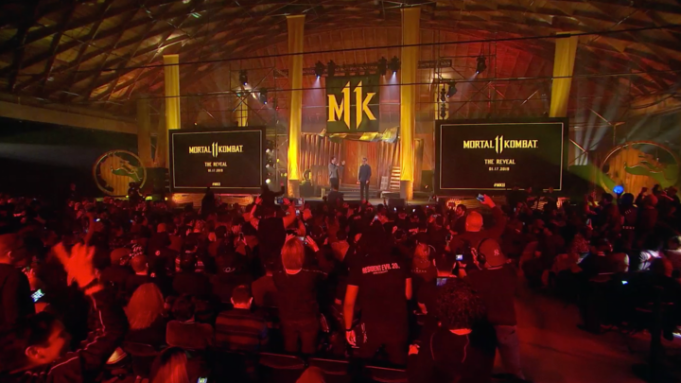 Creator Ed Boon took to the stage during Thursday’s “Mortal Kombat 11” community reveal event to debut the first footage of the game.

The event kicked things off with a heated match between Scorpion and returning character Baraka. The game will include familiar returning characters as well as new faces. The first seven characters revealed include Scorpion, Sub-Zero, Raiden, Sonya, Baraka, Skarlet, and Geras. Geras is a new fighter who can manipulate time. Baraka previously did not appear in “Mortal Kombat X.”

Character Variations introduced in “Mortal Kombat X,” will return, which gives three versions of every single character. Mortal Kombat 11 will feature custom variations that players can create themselves, as demonstrated during the stream. As is typical of the “Mortal Kombat” franchise, brutal Fatalities will be making their triumphant return as well, which were outlined in a quick sizzle reel.

The game’s complete story prologue was shown off during the event as well, giving players a taste of what to expect from the “Mortal Kombat 11” narrative. Raiden is seen disciplining Shinnok in a grisly manner. The story picks up after “Mortal Kombat X” and introduces a time-traveling narrative where older characters will be seen meeting their younger selves. The clip reveals a story unraveling around Raiden, who has upset the balance of history after eliminating Shinnok. Kronika, the Keeper of Time, has grown tired of Earthrealm’s “continued defiance,” and as such will attempt to bring order to the universe any way she can. Kronika marks the first female boss character for the series.

Later on in the event, it was revealed that American professional wrestler Ronda Rousey would be voicing seminal “Mortal Kombat” fighter Sonya Blade.

Developer NetherRealm Studios revealed its upcoming fighting game during the hotly-anticipated event at a worldwide premiere on Thursday. Events surrounding the reveal were scheduled for the better part of the day, with a pre-show kicking off at 10:30 a.m. PST and the main show beginning at 11 a.m. PST. The event streamed live from Los Angeles and London, with differing post-show content including interviews with pro players, celebrities, and other local flavor added in for good measure.

“Mortal Kombat 11” was originally announced at December’s “The Game Awards 2018,” where a debut trailer showed off a gory scuffle between seminal series favorites Raiden and Scorpion. Accompanied by a new track by rapper 21 Savage called “Immortal,” the footage highlighted some violent fighting moves and an interesting tidbit that sparked discussion among fans: why were there two different Scorpions locked in battle, including one from an earlier “Mortal Kombat” entry.