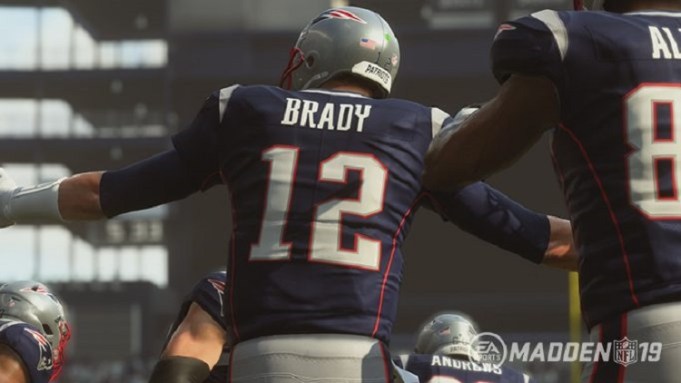 The LA Rams will defeat the New England Patriots 30-27 to become Super Bowl champions for the first time since 2000, according to Electronic Arts’ football video game “Madden NFL 19.”

Every year, EA runs a simulation in the latest “Madden” title to predict the outcome of the big game. While it has the Patriots outscoring the Rams in the first half 17-3, Los Angeles rebounds after halftime, racking up 27 points on three touchdown drives and two field goals.

The Patriots get a quick start in the first quarter of the simulation as rookie running back Sony Michel hits the end zone with a 3-yard run, EA said. The team’s momentum continues in the second quarter, with Brady connecting with Patriots wide receiver Julian Edelman for a touchdown. Meanwhile, the Rams manage to put three points on the board with a 38-yard field goal by kicker Greg Zuerlein. The first half ends with a 42-yard field goal from Stephen Gostkowski and the Pats leading 17-3.

The Rams offense comes alive in the second half, with quarterback Jared Goff throwing a 46-yard touchdown pass to receiver Robert Woods. The two teams each score a field goal, then the Rams regain momentum thanks to a 26-yard touchdown pass from Goff to Josh Reynolds. By the end of the third quarter, it’s tied 20-20.

The simulation’s fourth quarter starts with a 53-yard field goal by Zuerlein, then Brady regains the lead by throwing a 9-yard touchdown pass to running back James White. The Pats are now up 27-23. Rams running back Todd Gurley then comes through with the championship-winning touchdown on a 5-yard run.

We’ll find out just how accurate “Madden NFL 19” is in its predictions on Sunday, Feb. 3.