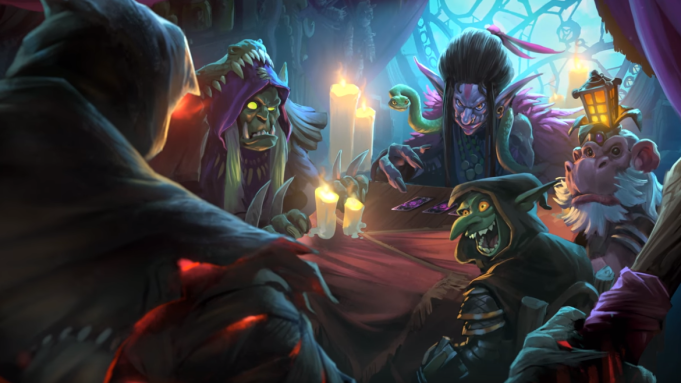 A new coalition of villains is rising to power in the latest expansion for digital collectible card game “Hearthstone,” developer Blizzard Entertainment revealed on Thursday.

RIse of Shadows kicks off “Hearthstone’s” first-ever yearlong story campaign. After suffering defeat at the hands of the League of Explorers (the game’s third expansion, which launched in 2015), the villain Arch-Thief Rafaam decided he needed some help carrying out his dastardly schemes. So, he’s recruiting for his brand new League of E.V.I.L. — a shadowy cabal comprised of villains from other previous “Hearthstone” sets, including King Togwaggle, Madam Lazul, Dr. Boom, and Hagatha the Witch.

“Hearthstone has a cast of fan-favorite villains, and it’s a thrill to see them take center stage in Rise of Shadows,” said J. Allen Brack, president of Blizzard Entertainment. “We can’t wait for players to get in on the mayhem in this expansion, with a bunch of sinister new cards at their disposal.”

Players get to help the villains too, of course, along with Lackeys — 1/1 minions with a variety of battlecries. Lackeys synergize well with Schemes, new spells that grow in power each turn they’re in a player’s hand. The new expansion also features callback cards featuring effects that pay homage to expansions from “Hearthstone’s” past.

Every villainous supergroup needs heroes to fight against, so players who help the League of E.V.I.L. with their nefarious plans could encounter the mysterious crime-fighting Defenders of Dalaran. These heroes wield Twinspells which, once cast, generate a copy of themselves that can be cast again immediately or on a later turn. Blizzard said it will share more about the Defenders of Dalaran at a later date.