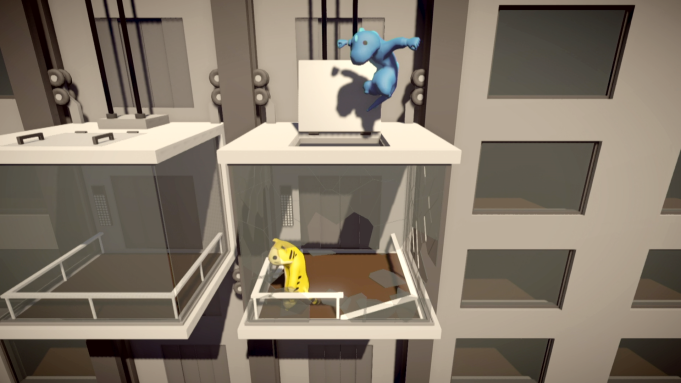 “Gang Beasts” is a colorful adventure with big, “gelatinous” characters, melee combat, and dangerous environments that find players punching, jumping, kicking, and grabbing each other while utilizing various contextual hazards to keep the brawls lively.

The fights take place in the fictional metropolitan area of Beef City, where fans are encouraged to beat the stuffing out of each other. It’s all about devastating physical abilities, though the “beasts” themselves are little more than multicolored models that can take a licking and keep on ticking.

When the game first debuted, it featured 8 multiplayer stages to explore, each with their own theme, as well as lively musical tracks to accompany them. The game’s soundtrack, from Adam Drucker (Doseone) and Robert Larder (Dirty Bob) adds thumping crescendoes for players to fight to.

Originally, the game released on PC, Mac, Linux, and PlayStation 4 back on Dec. 12, 2017 following an early access period for PC players that began back in 2014. As it joins the ranks of Xbox One titles, it will be up for grabs for $19.99. Currently, there’s no word for a future Nintendo Switch release, but as of its debut on Xbox One, it will be available on all other platforms aside from mobile.

The game will be discounted 20% from March 27 through April 9 in celebration of its Xbox One debut.