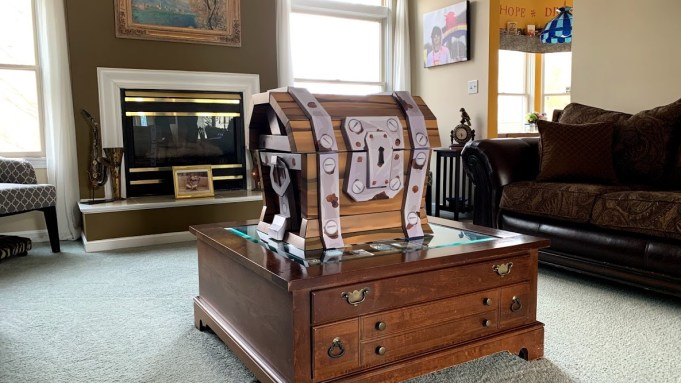 Over the summer, Jazwares and Epic Games inked a deal to roll out a new line of “Fortnite” action figures. The full line landed inside a life-sized loot box at Variety  Friday, giving us a chance to go hands with the minutely detailed toys.

While the figures seem well designed, especially for the price, and include 19 points of articulation — which means you can move and pose everything from legs, head, and arms down to their hands and feet — the real differentiator with these “Fortnite” toys are the building pieces.

The building pieces are different flat, plastic squares designed to look like a brick wall, wood floor or steel. They’re designed to snap together, edge-to-edge, in a way that allows a person to also fold them into shapes. So you can click six pieces together to form a flat rectangular wall, or fold them at the seam and form a smaller corner. This design makes it easy to recreate some of the odd creations found in a quick match of “Fortnite.”

We used them to string together a bit of a tableau of “Fortnite” battle royale, creating a large letter T, a platform for a sniper and a little room with a window, all in about an hour. It would have been easy to spend the rest of the day playing with the figures, but work and this story called.

Unfortunately, that life-sized, sturdy cardboard loot box isn’t for sale. At least not yet.