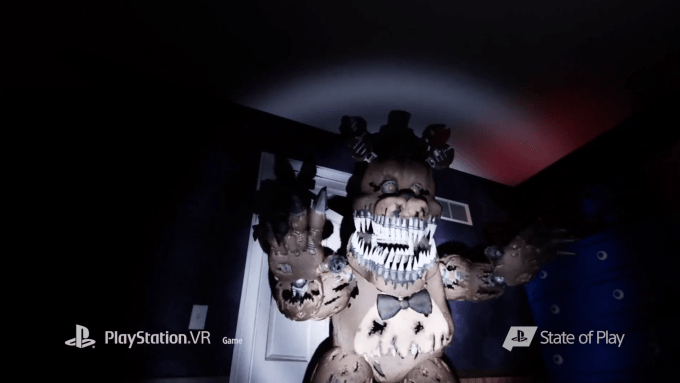 “Five Nights at Freddy’s VR: Help Wanted” is making the jump to virtual reality via PlayStation VR this spring.

In the new virtual reality installment of the jump scare-laden horror game, you’ll try to survive levels from the original games in addition to “all-new nightmares,” Sony announced during the presentation.

This is the first time the “Five Nights at Freddy’s” series has been seen on a visual reality platform.

“We are huge fans of Five Nights at Freddy’s and also recognize the original games’ design is perfectly suited for virtual reality. The title is an impeccable piece of video game mastery,” said creative director and co-founder of developer Steel Wool Games. “We’re thrilled Scottgames and Lionsgate chose us to lead the development of this project as it’s a game we’ve idolized.”

Steel Wool Games is known for its motion physics title “Bounce” as well as turn-based strategy game “QUAR: Battle for Gate 18.” Previously, the game was leaked via an ESRB listing that was quickly scrubbed from the page. The information began circulating via the “Five Nights at Freddy’s” subreddit, but there was no way to confirm the game’s existence at the time.