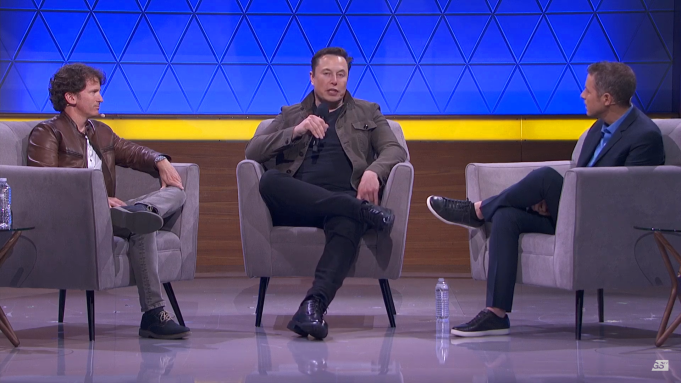 “That place,” he added, “is like ‘The Avengers’ meets NASA.” Howard first crossed paths with Musk while buying a high-end Tesla of his own.

There’s a certain amount of dark irony in “Fallout Shelter” coming to Tesla, given past speculation that Musk’s subterranean tunneling project in Los Angeles could one day serve as a real-world fallout shelter.

In 2015, Musk participated in a Reddit AMA — which stands for “ask me anything” — and was asked what his favorite video game was. He listed five picks: “Civilization,” “Warcraft,” “BioShock,” “Mass Effect,” and “Fallout.” (With the added context of today’s E3 Coliseum chat opposite Howard, it seems Musk meant “Fallout 3,” specifically.)

During a wildly surreal Q&A after the talk, audience members asked such questions as whether they could get autographs and selfies from Musk, or if Howard might need an intern at Bethesda. One young attendee tried to refute Musk’s ongoing claims that the known universe might in fact be a computer simulation.

The conversation was moderated by Geoff Keighley, creator of The Game Awards.