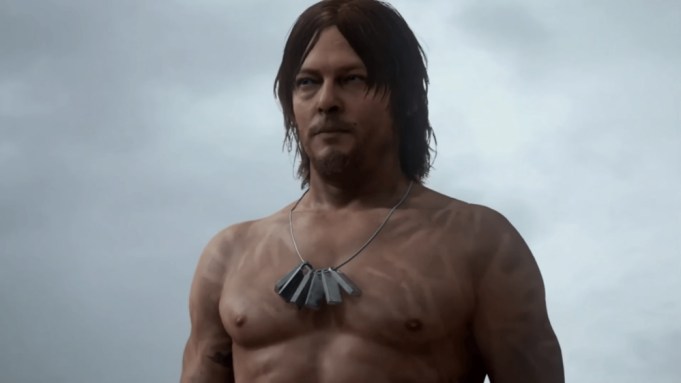 The official PlayStation synopsis for the game, which will arrive this November, reads “Sam Bridges must brave a world transformed by the Death Stranding. Carrying the remnants of our future in his hands, he embarks on a journey to reunite the shattered world.”

Developer and creator Hideo Kojima noted in an Official PlayStation Blog post that “Death Stranding” is a “completely new type of action game.” He explained that the goal as hero Sam Porter Bridges is to reconnect isolated cities and a “fragmented society.”

“It is created so that all elements, including the story and gameplay, are bound together by the theme of the “Strand” or connection,” explained Kojima. “As Sam Porter Bridges, you will attempt to bridge the divides in society, and in doing create new bonds or “Strands” with other players around the globe. Through your experience playing the game, I hope you’ll come to understand the true importance of forging connections with others.”

Apocalyptica’s “Path” accompanied the longest look we’ve had at the game thus far, showing off some of the extreme conditions Norman Reedus’s Sam Bridges will need to deal with.The trailer references things like the “bridge baby,” which means players are “connecting to the other side,” which Reedus notes “freaks him out.”

Details went live on the PlayStation Network regarding what type of pre-orders those who purchase “Death Stranding” can look forward to, according to the PlayStation Store.

The game is currently up for pre-order in several editions. Pre-ordering the Standard Edition for $59.99 will net players a voucher for a “Death Stranding” Dynamic Theme upon the game’s launch as well as a Chibi Ludens PSN avatar.

The Special Edition is $69.99 and includes a collectible Steelbook and everything that comes with the Standard Edition. Pre-order bonuses for the game’s Digital Deluxe Edition, which will cost $79.99, will include the include the Gold “Ludens Mask” Sunglasses item, a Gold Power Skeleton, Gold All-Terrain Skeleton, and Gold Armor Plate (Lv. 2). It appears that in-game items included with pre-orders will be unlocked as the story progresses.

Starting today, players can also pre-order the “Death Stranding” Collector’s Edition, which will retail for $199.99. It contains all previous Digital Deluxe Edition in-game items, the Special Edition Steelbook, and other physical items. It will come packing a life-sized BB Pod statue, a BRIDGES Cargo Case, and a Ludens keychain as well as everything that comes with the previous versions.