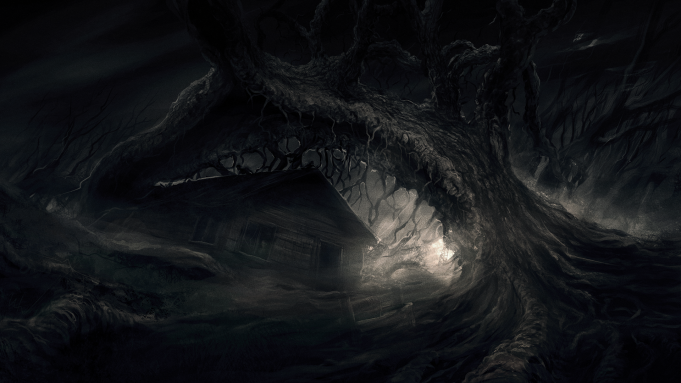 “Darkwood” is the sort of game you might not expect to find on the Nintendo Switch: It’s dark, violent, and immensely unsettling.

But the top-down survival horror title is also an excellent fit for the platform, the sort of evocative experience that a player can methodically pick at in short stints, or sink into for hours at a time.

The game takes place in a Polish village and the dark woods that surround it in the late ‘80s. It’s presented from a top-down perspective and instead of relying on unexpected surprises to scare, it delivers horror through a creeping, constant tension and unnatural creatures.

Most surprising is that this is the first game created by developer Acid Wizard.

“It’s our first game,” said Jacob Kuc. “We didn’t know anything about making games at all. Three guys and a dog is basically our whole studio.”

Despite its dark tones, “Darkwood” started out as an idea for a tower defense game with surprising inspiration.

“We were really inspired by ‘Home Alone’ where you are setting traps, but it expanded a lot from a three-month game to working on it from five and a half years,” Kuc said. “Basically, we were adding more and more mechanics from the games we liked.

“The top-down view was more about the fact that we were only three guys.”

As the game grew. “Darkwood” became a different sort of title.

That top-down view, which typically would provide an entire screen of surroundings to see, was narrowed down to a slive, a claustrophobic cone of light and the story became much more into focus.

“We are really inspired by old sci-fi Russian writers like the Strugatsku brother, who wrote ‘Roadside Picnic,’ which became ‘STALKER and David Lynch movies,” Kuc said. “That’s why the setting is Slavic because we are from Poland. We decided to make it Polish to make it as authentic as we could.”

While the trio of developers was living in Warsaw while they were making the game, Koc said he grew up in the countryside and much of the setting draws from his experiences living there.

“Traveling to our grandmother and grandfather and those recollections,” he said. “It’s like a twisted and dark vision of that.”

The game opens in a desolate, darkened house and provides almost no information to the player. As you explore your settings, venture outside, and wander the countryside, the uncanny nature of your dilemma comes into focus. The game features day and night cycles as an important element, and while the story remains unchanged, the maps and some events are randomly generated, lending each experience its own unique feel.

Players will have to scavenge materials and craft things to survive, they’ll have skills and perks to unlock, but ultimately the experience is about unraveling the strangeness that so tightly winds around the game.

Koc said the game will take 20 to 30 hours to beat depending on a person’s playstyle.

The story plays not just with the edges of reality, but also the notion of morality.

“We really like when games or media play with what’s good and what’s bad,” Koc said. “Protagonists and antagonists are switching roles and you don’t know what is good and bad, that’s your part to figure out. It’s messing with your head a little bit.”