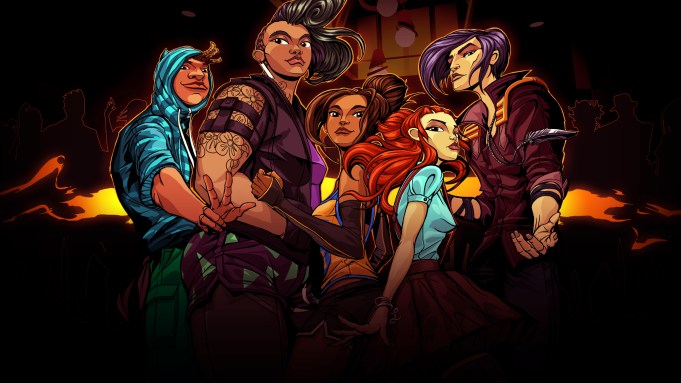 “Dance Central” doesn’t sound like something that should work in virtual reality, let alone work well. And while some concessions were necessary to make it work, “Dance Central VR” is an excellent adaptation of the seven-year-old franchise.

A big piece of the success is the Oculus Quest hardware. The standalone headset is due in Spring 2019, and Harmonix will be there at launch with “Dance Central VR.” It’s also due for Oculus Rift with cross-buy, for those that aren’t quite ready to upgrade to the self-contained Quest.

The original “Dance Central” titles used the Xbox 360 and Xbox One Kinect to track the full body. That’s just not possible in VR, so Harmonix commissioned choreography that is mindful of the limitations.

“We can’t score you the same way we used to, because we can only track your hands and your head,” says “Dance Central” creative lead Arthur Inasi. “That seems to make the experience a little more accessible and less scary for new players. And the fact that you have the helmet on and you aren’t seeing the outside world makes it easier for you to lose yourself.”

The Quest has an expansive tracking field (about 210 degrees), but Harmonix has figured out how to expand that using the new Touch controllers shipping with the Quest.

“We can track acceleration and velocity once we’ve lost [visual] tracking,” Inasi explains. “We can track on the controllers themselves, even if they are outside the Quest’s view. It calculates how long it takes to move back into tracking.”

Harmonix is also careful to ensure that aren’t dance moves that might threaten to fling an HMD from a player’s head. The choreography is designed to limit head and body gestures so your expensive Rift or Quest doesn’t go flying across the room.

“We had to consider that when we hired choreographers that we used moves that were not too extravagant, didn’t have you spinning around, didn’t have you facing backward, or walking off in a certain direction,” Inasi says. “We tend to do a lot of movements that are in front of your body or out to the side. Simple left and right stuff. No jumping.”

The in-game experience delivers on the immersion. It’s easier to feel comfortable dancing when the world around you is blocked out. The dancer players are asked to mirror are close enough that it feels like they are dancing with you instead of for you. The move “flash cards” also return to show you what moves are coming up.

On the standard difficulty, there is a lot of move repetition, so players can get comfortable. Hand gestures are a big part of “Dance Central VR,” using the Touch controllers’ capacitive buttons to signify open hands, fists, and pointing. These are not scored as strictly until you get to Pro difficulty.

The 32 songs “Dance Central VR” ships with will all be available at launch with no in-game gating. Players will be able to take on Pro mode with little barrier, also.

Harmonix incorporated learnings from previous VR projects over the two-year design period. The biggest is giving players a sense of comfort and belonging in the virtual environment.

“The idea of presence in a space is important, and we learned a lot from ‘Rock Band VR’ about how to make you feel like you’re in a real space, particularly from an audio perspective… where speakers are in space, how the crowd reacts to you” Inasi explains. “I don’t think we could have done this without that.”

“Dance Central VR” includes a campaign that allows players to unlock new dance partners and phone cases. Your cell phone is always by your side as a sleek menu, including for taking selfies in the extensive customization screen.

Harmonix is offering a large number of face and hairstyle types, and none are segmented by gender. This ensures players can feel free to express themselves in an authentic way.

“Dance Central VR” also innovates on the franchise with fully synchronized multiplayer across both HMDs. Players are dropped into a social lounge space. Moving across the space can be customized in three ways: traditional thumbstick movement, teleporting from point to point, or dancing. Shimmying your way across the dance floor is handled with simple arm gestures, and the game animates your avatar to look like you’re dancing, using motion capture data.

One of the challenges of any multiplayer space is the possibility of harassment. Harmonix has a solution ready. There are posters that adorn the lounge walls that let players know about a quick way to get rid of bad actors.

“We wanted a quick way for people to mute someone,” says product manager Alicia Caillier. “If you double thumbs-down, that mutes their audio and freezes their avatar. It gives you some time to report or change rooms.”

“Dance Central VR” hooks into Oculus’ system-level reporting and moderation tools. Harmonix has taken the next step to give players an immediate way to protect themselves.

In addition to live multiplayer, players can send challenges (complete with custom-recorded dance taunts) to their friends. Challenge, dance, and wait to see if your friend can top your performance.

“Dance Central VR” feels great to play, even if it doesn’t directly challenge players to move their legs in specific ways. The necessary changes for virtual reality certainly change the experience, but they don’t detract from feeling like a dance floor superstar.

The game’s songs will include chart-toppers from the ’70s through today. Harmonix said these will be the game’s first six songs: