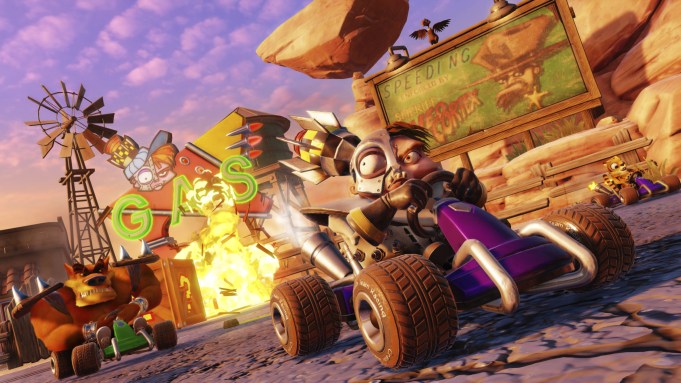 Everything in “Crash Team Racing Nitro-Fueled” has been recreated from scratch, Stephane Gravel, production director on the game at Beenox tells Variety.

“All of the assets are brand new, the characters were built from the group up, the same for the tracks and the remastered soundtrack,” he said. “we even rerecorded every voice over.

“I think it’s more of a recreation than a remaster, a remaking.”

The original “Crash Team Racing” hit in 1999 on the PlayStation and was so popular that the Naughty Dog developed title spurred a sequel of sorts in “Crash Nitro Kart,” which hit the Game Boy Advance, GameCube, PlayStation 2, Xbox, and of course, the N-Gage in 2003. The racing game blends the popular kart racing and power-up grabbing of the “Mario Kart” series with the big-headed Crash Bandicoot characters.

This latest version brings the mayhem to the PlayStation 4, the Xbox One, and perhaps most importantly, the Nintendo Switch. While the Switch has a kart racer in “Mario Kart 8 Deluxe,” itself a remaster of a Wii U game, there is no new “Mario Kart” title yet announced for the platform.

Gravel declined to get into a discussion about the vacuum “CTR” could be dropping into when it hits on June 21, but did note that the franchise has a massive following.

“First and foremost, fans have been asking for a remaster of ‘Crash Team Racing’ for a long time,” he said. “When we heard about it — at Beenox we are huge fans of the ‘CTR’ game — when we heard about the opportunity to work on the title we jumped at it.”

The game will feature all of original “Crash Team Racing’s” characters, modes, tracks, power-ups and the same feel of the controls. What it brings to the franchise and new systems is a much higher level of fidelity — both the PlayStation 4 Pro and Xbox One X can deliver 4K graphics — as well as the ability to customize karts and a much needed online mode.

Gravel said he believes the game’s updated graphics will open up the game to a new generation of players who may have been put off by the dated look of the older games, adding that the team will be watching how the game rolls out to see if online play needs any sort of tweaks.

He traveled with the game to New York last week to show off three maps running on a PlayStation 4 both in single player, and two-player split-screen modes. The game seems to have that same feel as the original, but with much better graphics. It’s likely “Crash Team Racing Nitro-Fueled” will find a solid following on the Switch, where it can offer a slightly different take on the “Mario Kart” feel.

Gravel declined to say if the game would ever come to PC or if it could be brought over to smartphones. There have already been two other “Crash Team Racing” games on the mobile platform.

“Who knows,” he said. “Right now we are fully dedicated to making this for the PlayStation 4, Xbox One, and Switch. But who knows? It depends on how much fans are playing the game, especially online.”