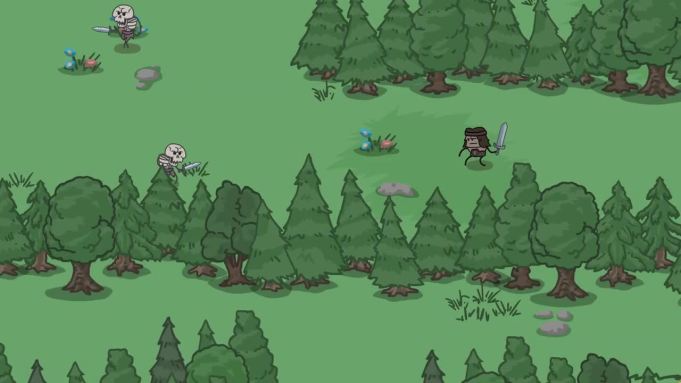 “Conan Chop Chop” first appeared as an April Fools joke from Funcom earlier this year, but as it turns out the game is very real.

In development from Australian studio Mighty Kingdom, Funcom is publishing the top-down, cutesy rogue-like inspired by the Conan the Barbarian saga, the company announced during the PC Gaming Show at this year’s E3 2019.

“Conan Chop Cop” will launch Sept. 3 for PC, Xbox One, PlayStation 4, and Nintendo Switch. For those currently checking out the slate of games at E3, a playable version of the game is available at the Funcom booth.

Featuring four-player couch co-op, in “Conan Chop Chop” players are tasked with thwarting the plans of the evil wizard Thoth-Amon, who plans to resurrect the even eviler wizard Xaltotun.

“Keeping this a secret has been a hardship,” said Funcom CEO Rui Casais in a prepared statement. “The feedback we got from fans when we released the April Fools’ Day trailer was amazing and remarkably unanimous, and so I have been itching to give them the good news ever since.”

“But don’t be fooled by the game’s humoristic and quirky looks. There is a lot of hard work being put into this, and the game should thrill roguelike fans and hack & slash fans alike,” says Casais.

Check out the original April Fools trailer for “Conan Chop Chop” below, and the official announcement trailer above.

E3 2019 will take place in Los Angeles on June 11 through 13, and we’ll cover all the highlights of the event here at Variety as well.