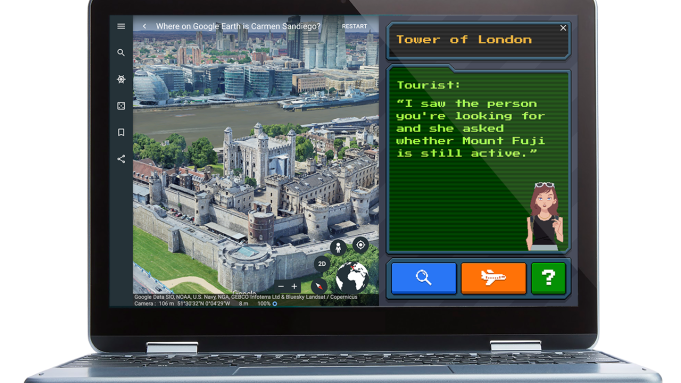 In a partnership with Houghton Mifflin Harcourt, Google Earth released a reimagining of the classic educational game that uses the service to send players on a globe-trotting trip to find the elusive criminal mastermind.

“The Crown Jewels Caper” plays out similarly to the original 1985 title “Where In the World Is Carmen San Diego?” as it sets the stage with Carmen having not yet vanished with pilfered treasures in tow. As members of the ACME detective agency, players must head to Google Earth, look for the yellow stick figure icon, and give chase to Carmen.

“It’s for all those gumshoes who grew up with the chase, and for the next generation feeling that geography itch for the first time,” Google noted in a press release.

The game will have players traveling all over the world within the app, checking out new destinations, interviewing witnesses, and answering questions about the locations they find themselves in. There’s trivia about the location’s history, local culture, and more that must be answered in exchange for important info about Sandiego’s whereabouts. Then it’s off to go to another city to make an attempt at catching Carmen before she does any more damage.

Despite a short-lived revival on Facebook, this is the most recent attempt at a “Carmen Sandiego” video game, though the character was resurrected for a new Netflix series in January. Gina Rodriguez was cast as Sandiego, with one season live on the streaming service now. There are additional episodes on the way.