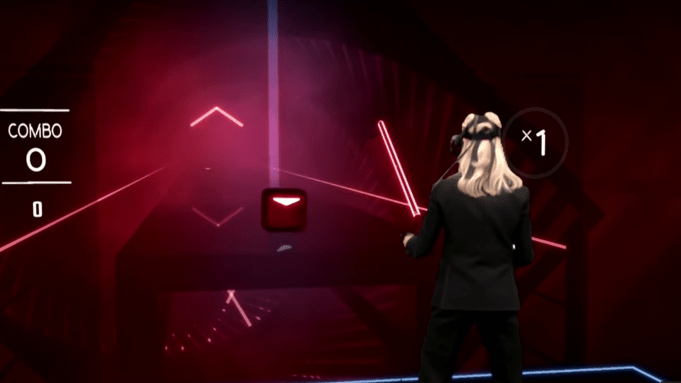 “Avengers: Endgame’s” Brie Larson took to “The Tonight Show with Jimmy Fallon” to play around in virtual reality.

After chatting with Fallon about the upcoming Marvel superhero flick, Larson got hooked up with an HTC Vive with the talk show hit to give “Beat Saber” a try. Fallon was first up, who played through a lower difficulty level and slashed through the game’s oncoming notes with surprising prowess.

Larson played through a level on Hard mode, demonstrating an unknown talent as she sidestepped the level’s oncoming walls with surprising deftness. Fallon got in front of her when the song began to speed up to mess about with her as she continued powering through the level like an old pro.

“Beat Saber” is a rhythm game that, much like games like “Guitar Hero” or “Amplitude,” has music notes careening toward the player on a path down the center. Rather than pressing buttons on a colorful guitar or on a controller, players use VR controllers and react in real-time, moving their bodies away from obstacles and slashing through the air as if they were using real swords to “break” the blocks.

By the end of the song Larson had proven she was surprisingly adept at the game, completing the entire stage as Fallon clapped from the sidelines, the entire crowd cheering for her.