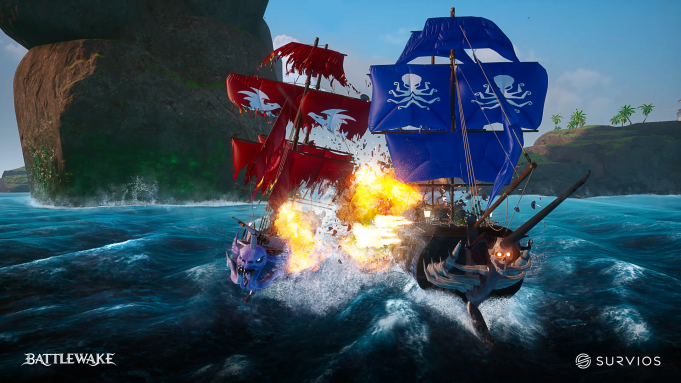 “Battlewake” turns players into “super-powered pirate lords embarking on a larger-than-life nautical war for the ages” when it hits VR arcades and yet-to-be-named VR platforms this summer, according to the company.

Players will control an upgradeable warship armed with a collection of thirteen different ship-based weapons inspired by real and imagined naval battles including flak cannons, ballistae, and axe throwers. Each of the four playable pirate lords also has their own ancient magic to drawn from to unleash special and ultimate attacks like tsunamis, maelstroms, and kraken.

The game will feature a variety of game modes including single-player player-versus-environment and multiplayer player-versus-player modes. The game will include a 20-chapter story that can be played alone or cooperatively. The game’s Warfare mode has players working together to complete objectives. The game will also chart player progression in the Captain’s Quarters, allowing players to spend gold earned from matches to boost ship stats and arsenals as well as leveling up a player’s pirate lord skills and abilities.

Most importantly, Survios says that it is using its experience working on “Raw Data” — where they came up with teleshift — and “Sprint Vector” — where they developed fluid locomotion — to ensure that playing “Battlewake” won’t make people sea or motion sick. The game marks the studio’s first work on vehicular motion and combat in VR and uses technology that the company calls the immersive vehicle system.

“Using adaptive physics and peripheral effects subsystems, players can focus on the battle at hand and take on the wildest waves, while limiting the common triggers for sea-sickness,” according to the press release.

The game will also feature reactive water that will turn the sea from peaceful to extreme based on things like comets smashing into the sea, tentacles plunging into the water, and cannon fire. There will even be whirlpools, tidalwaves, and maelstroms.

The arcade build of the game will support up to 10 players, though it’s unclear if that differs from the home version. Survios is taking applications for the game’s closed beta starting Tuesday, plan to show the game to press at E3, and hope to launch it this summer.

This is Survios’ fifth game. The company was founded in 2013 as a virtual reality studio dedicated to premium game development and location-based entertainment initiatives.