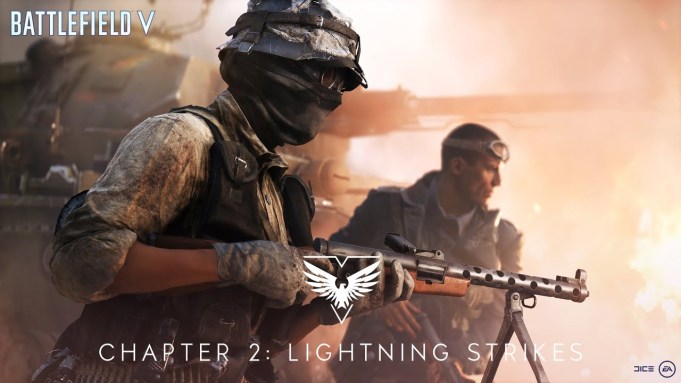 Developer DICE released the first trailer for Chapter 2 on Monday, advertising the new content coming for players. “Battlefield V” fans can look forward to new weapons, vehicles, Company gear, and the return of a new revised Rush mode as well as Squad Conquest. The introduction of the game’s new co-op game mode Combined Arms will take place during Chapter 2 as well.

From Jan. 17 through Jan. 30, Weekly Challenge rewards will be meted out to players who take part in the new Squad Conquest mode, with Week 1 rewards including the Zk-383 submachine gun for the Medic class and Week 2 rewards offering the Model 1944 semi-automatic rifle for the Assault class. Tank Hunter vehicles can knock out enemy armor with ease, and there are also new Reinforcements to use: Sector Artillery and Smoke Barrage.

Squad Conquest finds two squads of eight players facing off two other squads with eight players apiece. There are three flags to control in downsized versions fo Rotterdamn, Hamada, and Arras maps. Flags must be held until one team runs out of respawn tickets, and if players run out of respawns, it’s game over.

Meanwhile, fan-favorite Rush mode is returning from Mar. 7 through Mar. 20. Players will either attack or defend in this classic mode, with attackers being given limited respawn tickets and tasked with arming two bombs before they run out. Defenders need to stop them before this happens. Rush can be played on Narvik, Twisted Steel, and Devastation.

February will see the introduction of cooperative play with Combined Arms, with the first Combined Arms mission finding players attempting a surgical strike on one objective across eight missions. Later that month, a new Grand Operation will debut as well on the Panzerstorm and Arras maps.

There’s a good amount of content coming for “Battlefield V” players, and though much of it is spread over the next few months, there’s plenty to do until then for those looking to get their first-person shooter fix.