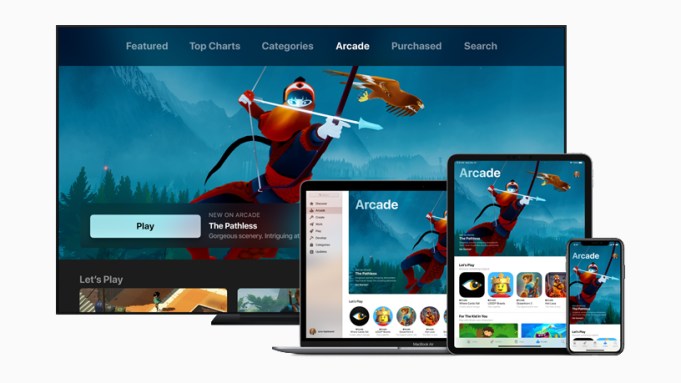 Apple Arcade is the world’s first game subscription service for mobile, desktop and living room, the company said. With a single subscription, you get access to more than 100 new and exclusive games. The games won’t be on any other mobile platform, according to Apple. The subscription will let you download and play as many of the Apple Arcade games as you want. They all feature cross-play between Apple devices, support family support — so everyone in a family shares the games for one fee — and all of them will be playable offline.

Apple Arcade, which hits this fall in 150 countries from a new tab on the App Store across iOS, macOS and tvOS, will be curated by the same Apple team that curates the store. Pricing and further details will be announced later this year. Apple Arcade will launch in fall 2019 in more than 150 countries

“The App Store is the world’s biggest and most successful game platform. Now we are going to take games even further with Apple Arcade, the first game subscription service for mobile, desktop and the living room,” said Phil Schiller, Apple’s senior vice president of Worldwide Marketing. “We are working with some of the most innovative game developers in the world to create over 100 new and exclusive games to play across iPhone, iPad, Mac and Apple TV. Apple Arcade games will be great for families, respect user privacy and will not have ads or require any additional purchases. We think players of all ages are going to love Apple Arcade.”

Developers interested in being considered for Apple Arcade should visit developer.apple.com/apple-arcade.

Rumors of the Apple gaming subscription service first hit in January, when Cheddar reported on the premium service. Rumors had it that subscribers would get access to a bundle of paid games from various developers for a set monthly fee.

Developers will then receive a cut of the revenue generated from these monthly subscriptions based on how much play time users spent playing their title, a source told Bloomberg. The service will exclude free to play titles that offer in-app purchases, according to the source.

Apple is also gearing up to reveal details of its video, TV, and news subscription services, so the addition of a gaming service seems a natural addition.

Apple’s subscription service comes as an increasing number of major companies expand or bolster their offering with either monthly subscription services for downloadable games, or services that stream gameplay directly to a variety of devices. While Microsoft and EA have both discussed streaming game services, Google last week beat both to the punch with news of its Stadia gaming service, which it said would be going live this year.

The App Store has earned $120 billion for developers worldwide, according to Apple.