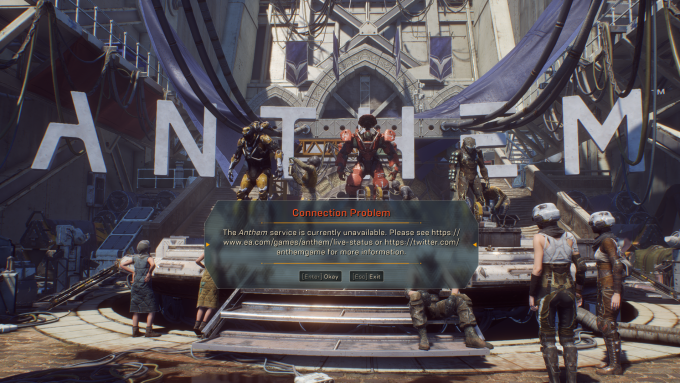 Updated: The main issues impacting the “Anthem” VIP demo have been resolved, according to publisher Electronic Arts.

The company took to Twitter Friday night to note that anyone still having issues should restart the game and attempt to join again. The news came for the PC and PS4 versions of the game about 11 p.m. ET and for the Xbox version nearly an hour after midnight.

Earlier in the day major server issues either prevented players from joining the demo or caused major problems during matches. Players were reporting that they couldn’t get into the VIP demo at all, and were being met with frustrating errors regarding full servers, the “Anthem” service being unavailable, and a myriad of other issues. While some are seeing errors reporting server capacity problems, others are being allowed into the game, but kicked out shortly afterward.

The official EA Help account on Twitter noted that it is currently addressing adding “more server capacity” to the demo and looking into the “infinite loading issue” players have been reporting as well.

We're adding more server capacity to the #Anthem demo right now. Hang tight while we work to get everyone into the game.

We're looking into the infinite loading issue with the #AnthemGame demo. In the meantime, try relaunching the game and rejoining your mission to see if that helps you.

We're now also looking into login issues across all of our games and services, including the #AnthemGame demo. Hang tight–we're on it, and we'll share more info as we have it.

Electronic Arts global community manager Jesse Anderson took to the social media platform to explain that the team would be working on scaling the “Anthem” servers back to gradually allow players in waves, which has apparently allowed several players into the game.

UPDATE on #AnthemGame VIP demo – we're scaling the servers to let more players in gradually to avoid crashing. We'll continue to scale until everyone is in.

The VIP demo, which began Friday morning and runs through Jan. 27 for players who pre-ordered the game or subscribe to Origin or EA Access, has been experiencing these problems since it became available.

Curiously, despite the widespread problems, the official “Anthem” live server status tracker isn’t reporting any problems with the game at this time.

There is an additional open demo coming down the line that will run from Feb. 1 through Feb. 3, which will be open to all players, in the event this demo’s spotty start keeps players from being able to participate. “Anthem” is planned for a full release on Xbox One, PlayStation 4, and PC on Feb. 22, 2019.