ASUS revealed an improved version of its Zephyrus gaming laptop, as well as a new desktop replacement and gaming peripherals at CES 2019, according to a series of press releases.

First up, let’s take a look at the new ROG Zephyrus S GX701, and how it’s improving upon the GX501. The new GX701 boasts an i7 processor with NVIDIA GeForce RTX 2080 with Max-Q Design, which makes for notebook with impressive graphics performance as well as one capable of multi-tasking, such as gaming while voice-chatting, streaming, etc.

The new Zephyrus boasts an impressive 24GB of RAM and “as much as 8GB of separate GDDR6 VRAM dedicated just to the GeForce RTX GPU.”

This laptop is 17 inches (compared to the GX501’s 15 inches), and is quite thin as well at only 18.7mm, which ASUS claims makes it the thinnest gaming notebook. With such a slim design for this level of gaming performance, cooling could be an issue but ASUS developed what it calls an Active Aerodynamic System to draw in air, and a self cleaning cooling system to avoid accumulation of dust.

Finally, the Zephyrus S GX701 looks pretty sleek with a very thin bezel (6.9mm) and has an RGB LED keyboard that users can configure to their liking. With such a slim bezel, the webcam is external and “optional” (which sounds like it could be sold at additional cost) called the ROG GC21 which captures Full HD footage at 60 FPS.

Pricing right now is unclear, but it’s releasing this quarter, according to a press release.

A sleeker look across all PCs for ASUS seems to be a theme this year, including its new ASUS Republic of Gamers Mothership (GZ700). See for yourself below. 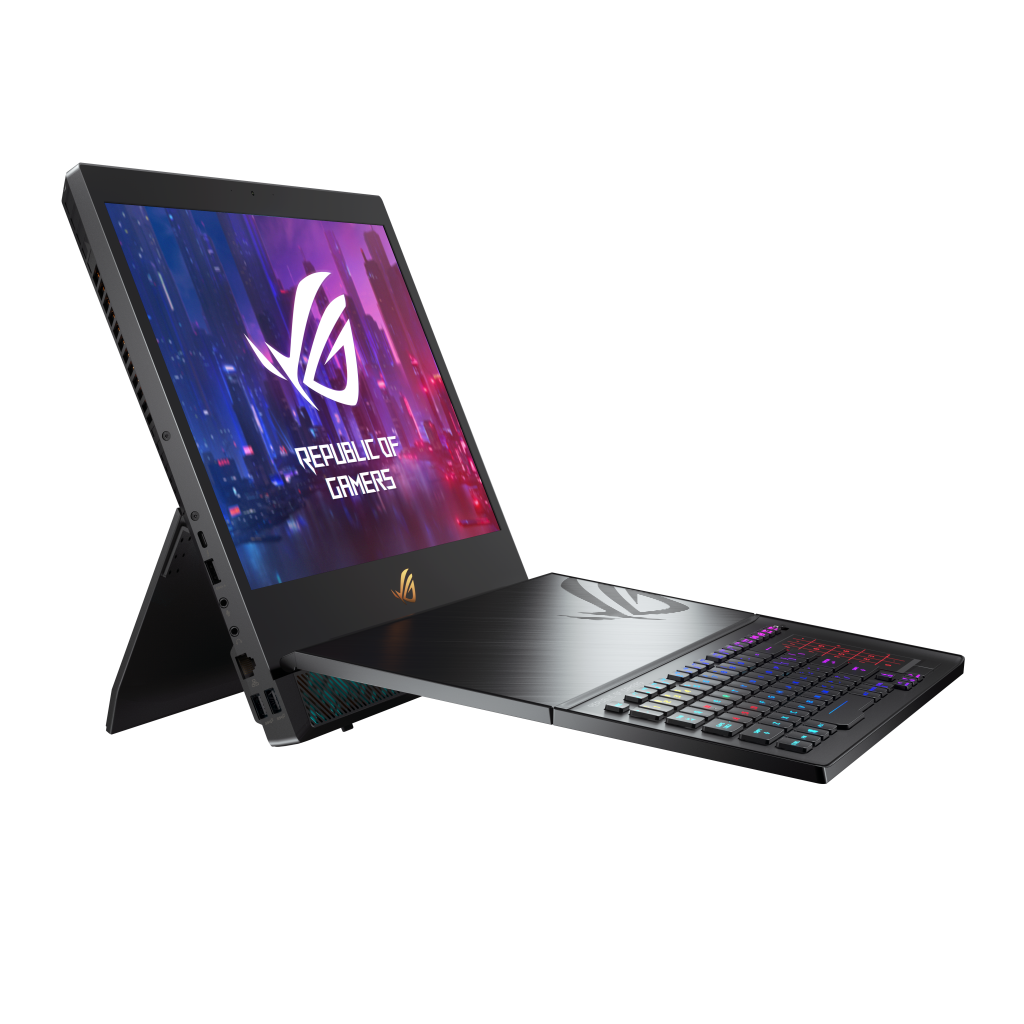 It doesn’t just look pretty, the desktop replacement has an Intel Core i9 processor and an NVIDIA GeForce RTX 2080 GPU packed into its 17.3 inch frame with a detachable and foldable keyboard.

With its new lineup, ASUS has an ideal laptop for various types of gamers, whether they prefer MOBAs or shooters.

ASUS also detailed three new graphics cards, the ROG Strix, ASUS Dual, and ASUS Turbo. All of the graphics cards feature the new NVIDIA GeForce RTX 2060 GPU and GDDR6 memory, and are tailored for different PC builds, according to a press release.

ASUS revealed peripheries at CES as well, including the TUF Gaming K7 which will be its first optical-mech gaming keyboard, according to a press release. The keyboard has a faster response time by avoiding debounce issues, and is completely waterproof, for the convenience of multi-tasking gamers.

For those who are gaming on the go, ASUS also unveiled its TUF Gaming BP2700 Backpack, which features over 12 compartments and repels water and scratches, according to a press release.