How ‘Final Fantasy XIV’s’ Latest Surprise Was Hatched Over Drinks 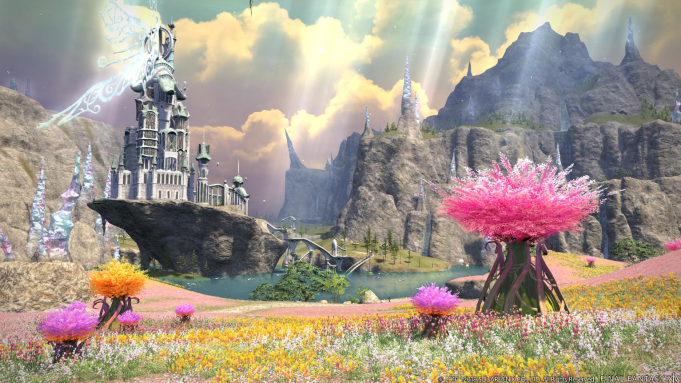 “With any sort of surprising collaborative efforts, I think there’s always some kind of alcohol involved.”

It’s the end of a long opening day at the European leg of “Final Fantasy XIV”‘s Fan Fest. If he’s feeling the 11-plus hour working day, producer/director Naoki Yoshida certainly doesn’t show it as he admits that this latest, and surprising, “Final Fantasy XIV” collaborative twist – a partnership with “NieR: Automata” producer, Yosuke Saito, on a new Alliance Raid for the newly announced “Shadowbringers” expansion – came about after some end-of-the-day drinks.

“We do not have an ‘end’, so to speak, for MMORPGs, but at the same time, we do want to have change happen within the game as well,” Yoshida explains via his translator, detailing how he attempts to keep XIV’s content feeling fresh. “If we were to continue with the same staff members, and the same designers, we may – potentially – end up with very similar content. But at the same time, it would be too risky if we were to take the system and change it [completely].

“I didn’t want something that was half-boiled,” he adds. “I wanted something that had impact, make sure that we have robust content, and have Mr. Yoko Taro involved as well, so that we can bring that surprise to our players. I thought that it would be very interesting to do it that way… so we were talking about it over some drinks, and that’s how the conversation got started.”

That said, Yoshida doesn’t want crossovers where the story doesn’t “fit naturally into “Final Fantasy XIV””, and if there are further collaborations afoot, he isn’t talking about them just yet (although – perhaps intentionally – just a few hours after this interview, Square Enix announced a further “Final Fantasy XIV” mash-up, this time with its sibling “Final Fantasy XV” for a crossover event). When asked if the work with Sato was potentially the first in a series of partnerships, Yoshida wouldn’t give a definitive answer.

“We haven’t started anything yet, so there’s not much I can say,” he says, giving nothing else away. “We’re not even sure whether we’ll keep doing Alliance Raids with guest creators. It wouldn’t be that fun if it ends up becoming the same old pattern. We have to think of different ways to surprise [the players]. I want to make it as unexpected as possible… so just wonder about all the possibilities that can happen for now.

“I think we would like to explore different avenues of bringing that element of surprise and do things that people may not imagine [us] doing.”

It’s impressive how far “Final Fantasy XIV” has come since its shaky start way back in 2010, though. As Yoshida himself acknowledges, “the original 1.0, “Final Fantasy XIV” was initially in a very bad condition” and it limped along for three years until “A Realm Reborn” breathed new life into the lackluster game.

Now, however, its fortunes have shifted significantly enough to prompt three world tours. Thousands of fans have congregated to celebrate all things “Final Fantasy XIV,” from panels and signings to carnival games and spectacular concerts showcasing the game’s most iconic music. Last weekend, people trekked from all across Europe and gathered hungrily for development panels, the live “Letter from the Producer” presentation and news that “Final Fantasy XIV: Shadowbringers” launches July 2 on PC and PlayStation 4. It’s an incredible achievement, and while the team can be proud of how far it’s come, it knows that it can never take the game’s tight-knit, passionate community for granted again.

“The trust that we had with our fans was broken and we were able to regain that with the [A Realm Reborn] relaunch,” Yoshida says, reflecting on “XIV”‘s most notable challenges, and successes, to date. “I think that’s the only thing that I could consider as our achievement at this point because if we get complacent, then we wouldn’t have that spirit to challenge something, to continue to push ourselves forward. I want to continue to not be stagnant. I want to continue to challenge and move forward.

“One of the biggest lessons learned – and this may not necessarily be just for “XIV”, but overall for our company Square Enix – [is] people around the world wait for our latest games. I feel that it’s very important to face that expectation, to look at it and make sure that we are responding to [it] – give it our best so that we can perform and deliver.

“I feel that Square Enix as a whole has shifted so that we are more focused on that aspect,” he adds. “We continue to pursue that kind of aspiration for “Final Fantasy XIV” as well. I’m very grateful to my development team, as well as the fans who have been with us in order to drive us.”

It’s clear that Yoshida uses this drive to keep “XIV’s” content fresh, and these collaborations stem from a ferocious desire to never let the game fester in complacency again, as well as reward players with little sprinkles of fan service, such as the recently announced return of the female Viera. It seems Yoshida’s determination to keep surprising fans comes from having been a long-time “Final Fantasy” fan himself.

“I actually played the very first “Final Fantasy” and continue to play,” he says, reflecting on how – or even if – it’s important to draw inspiration from “Final Fantasy”‘s rich and lore-strewn history. “You can say I’m a very old-time fan. But looking at “Final Fantasy” – especially from “Final Fantasy VII” and beyond – with each numbered title there’s a different world setting, different characters – everything was different. There are good elements to games like that, but at the same time, I think there are bad elements, as well.

“With “Final Fantasy XIV” – especially with the relaunch of “A Realm Reborn” – I felt that we didn’t have enough fan service to people who enjoyed the “Final Fantasy” series. So I tried to incorporate as many of those “Final Fantasy” elements as I could, make it a sort of theme park of “Final Fantasy” so that fans like me, old-time fans – as well as more recent fans that got to know [the series] through some of the newer titles – can all enjoy and come and play together.”