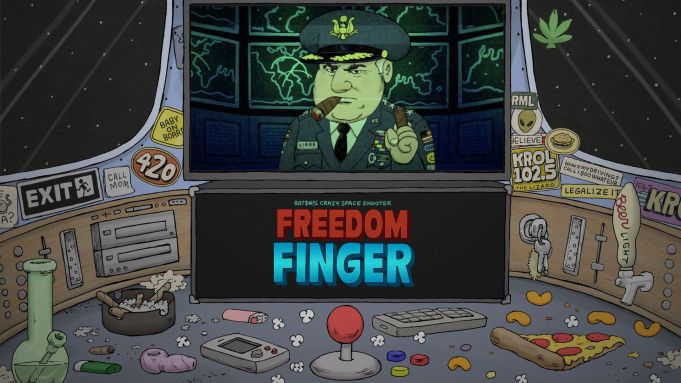 “Freedom Finger” is a hand-drawn, hand-animated shoot-em-up that smashes together the 60s’ aesthetic of “Yellow Submarine” with the irreverent humor of Adult Swim.

“I created a kid show on Nickelodeon called ‘Sanjay and Craig’ and I worked with Nolan North and John DiMaggio and a team of really great artists,” Dirschberger said. “And I don’t know, I’ve always been a gamer and after doing a TV show I wanted to do something more interactive and I just said, ‘What the hell? Let’s make a game.’ So I brought over a lot of the team that worked on that show, a lot of the cast and we’ve been jamming on that for about two years.”

The result is a visually rich side-scrolling space shooter that has players controller rocketship in the shape of a giant armored fist with its middle finger extended. The ship has to blast and punch its way through nearly 40 levels to beat the game, but things get really interesting when it grabs enemies. Once it grabs an enemy ship it gains that ship’s firing ability. The ones that can’t fire, the giant space hand can toss at enemies.

The idea to create a game inspired by retro shooters came from both Dirschberger’s love of the genre, and the fact he says he’s not very good at them.

“I love games like ‘R-Type,’  bullet hell games, but modern bullet hell games gives me massive anxiety, so I thought I’d create a, I dunno, bullet light game. Some people describe it as if Kirby was a (shoot-em-up). It’s a little bit slower paced.

“So I love shooters, especially bullet hells, but I suck at them. So there’s no game that really scratched that itch that didn’t send me up the walls. So there was a hole in the marketplace and  I thought, let’s fill it.

Dirschberger said all of the game’s art was designed by LA-based illustrator Travis Millard.

“He does a lot of like concert graphics, album artwork for like Dinosaur Jr.,” he said. “We try and keep it as close to the animation that I love. That’s like television quality, hand-drawn pencil on paper kind of stuff. The music is crazy. Each level in the game has a unique song and that kind of drives the action.

“So if it’s like a slower song by a guy like Com Truise, it’s more like mellow and atmospheric. But if you get a song by like Red Fang or Metz it’s going to be bat-shit fast.”

The game’s 37 levels include bosses, a story and even some branching paths, so “Freedom Finger” was designed to be replayable.

Dirschberger said at the studio’s peak there were about 18 people working on the game, which is set for a release by the end of the summer on WIndows PC, PlayStation 4, and Xbox One. Currently, just seven people are working on the game as they finish polishing up the title.

While there currently aren’t any plans for the game to come to the Nintendo Switch, Dirschberger said he was looking into that.

“We’ve been talking to some people here at PAX and we’re hopeful,” he said. “That’s been the number one thing that everyone’s asking, ‘Where’s the Switch port? Where’s the switch port?’ We’ve heard those people and we’re going to do everything we can to get it on the Switch ASAP.”

“Freedom Finger” is Dirschberger’s first game, and he’s not entirely sure yet if the studio will make another.

“I don’t know,” he said when asked. “Some days I feel like game dev not even once, you know, it’s so hard. It’s much harder than any feature film or television show I’ve ever made or worked on. But the reward is much greater. You know? Like especially here at PAX, watching people play it and laugh at the story or when they can grab any enemy.”

Asked, given his history in television, if “Freedom Fighter” could ever become a show, Dirschberger said it’s a possibility.
“Oh my God, that would be insane,” he said. “ It would definitely be like an Adult-Swim type show. I’m actually doing a pilot with Adult Swim right now, so maybe I’ll pitch it to them.”