‘World of Horror’ Is a Frightening 1-Bit Masterpiece 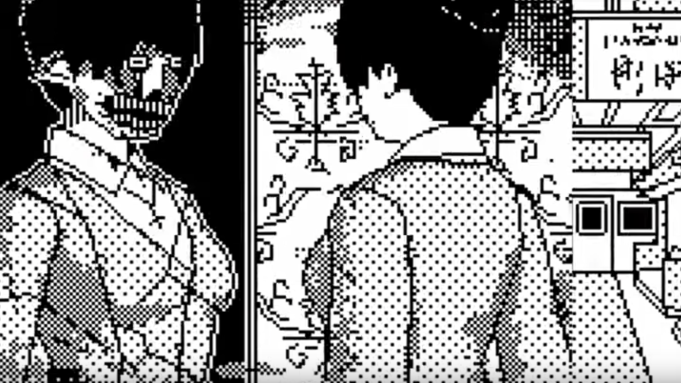 Horror has a sliced open face and comes at you in monochromatic Microsoft Paint art in the upcoming indie darling “World of Horror.”

The little creation, which started out as a title on open platform Itch.Io, has been taking gaming expos by storm. Most recently, Pawel Kozminiski and his one-man Polish studio Panstasz were at PAX East to show off the game which is headed to Windows PC, PlayStation 4, and Nintendo Switch.

“This is my first project,” Kozminski told Variety. “It’s a love letter to the things that inspire me from Manga to (Ito) Junji to H.P. Lovecraft to body horror like John Carpenter’s ‘The Thing’ and ‘The Fly,’ and some straight to video trash movies from the 90s.

What’s most striking initially about the game is its deliberately old-school look. The game is essentially a text adventure illustrated with hundreds of images created by Kozminiski in the often-maligned, simplistic graphics editor Microsoft Paint.

“I tried to give it a static look, true to the hardware animations of the era with one or two frames,” he said.

Kozminiski was working away on the game using Game Makers Studio as a hobby when he a chance meeting with publisher Ysbyrd Games turned his idle-time into a job.

“I’ve always wanted to do something like this and by chance, I met my publisher and they decided to go full time and big with it,” he said. “The game is a mix up of adventure and RPG-style combat, but also with some visual novel elements.”

In the game, players find themselves in a small seaside town in Japan in the late 80s. An old god slumbering deep beneath the town is slowly waking and it’s up to the player to try and stoke it from fully awakening. To do so, the player must solve five bizarre, horrific mysteries.

Currently, the game features 17 mysteries in total, and each playthrough randomly grabs the nearly half dozen for the player to solve.

“Each time you play, you discover something new and unlock something new,” he said. “They’re taken from the pool of possible mysteries.

“The main boss is from a Japanese urban legend, the Slit-Mouthed Woman.”

The Slit-Mouthed Woman, he said, is a legend about a woman wearing a mask who asks people if they think she is beautiful. No matter what you answer, the woman takes off her mask to show that her mouth has been cut open.

“I’m hoping it will scare people, “ he said. “People seem to love it and I’m so grateful for that.

“I was afraid people wouldn’t understand it and that nobody would play it because it looks like an old game. I am so surprised by the reaction of people.”