‘Tonight We Riot’ Delivers Socialist Message to the Nintendo Masses 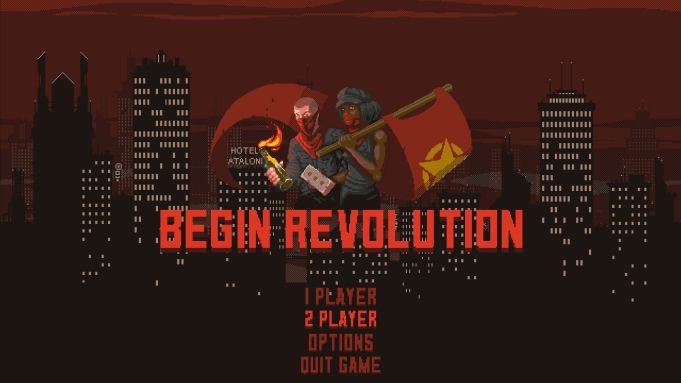 “Tonight We Riot” is an unapologetically political, socialist game about worker liberation in the face of overpowering capitalism.

It’s also quite a bit of fun to play.

“The idea for the game came from a multitude of places,” Ted Anderson, an artist with game developer Pixel Pushers Union 512, told Variety. “For one my own politics. I’m a socialist and I’ve never seen an unapologetically left-wing game ever and I played games my entire life. So I started thinking, what would be an interesting way to tackle that as a topic. So we bring it up in the game and we try and present it in what I feel are honest, earnest but still fun ways.

“Even though the politics are serious, you’re still going to be fighting goofy stuff like a giant mutant squid or mech suits and the like.”

In “Tonight We Riot” players control an ever-growing crowd of people. As the players move through the game from left to right, they liberate buildings — growing their crowd — and take on enemies from the routine to the surreal.

The basic weapon of the crowd is their fists, but players can pick up other items like bricks to toss at the enemies. There’s also some tongue-in-cheek weapons like a soda can — meant to represent a Pepsi — which, when placed on the ground in front of the police, infuriates them, making them more powerful.

“‘Tonight We Riot’ is what we’re calling a crowd brawler, which is to say it’s kind of like if you took games like ‘Streets of Rage’ and ‘Pikmin,’ mixed them together and gave everybody Molotov cocktails,” Anderson said. “So it’s a very controlled chaos kind of game where you and a buddy run through the world with a little crowd, an ever-growing crowd of followers that are like running behind you and you’re out there liberating workers to join your cause and take the fight to the streets.”

Because it is a socialist game, there is no singular hero, instead, players control one member of the crowd. Once they die, another member steps up until the crowd is gone and the game ends.

The bigger the crowd the more powerful the attack as well, for certain weapons. For instance, when the player-controlled character throws a brick, all of the members of the crowd throw bricks.

“There’s no singular face of the revolution,” Anderson said. “The revolution for us is everybody working together in common cause and the liberation of each other. So that’s why there no one singular person who is in charge.

“The politics of the game are all about worker liberation and workers of all class and creed working together to create a new system where everyone is taken care of and basically shrugging off the control of the capitalist system.”

The game, which is set for a Nintendo Switch release, is split up into four worlds with four levels and one boss fight each, and then one final mega-level. There’s also an unlockable endless mode that has players taking on waves of enemies.”

The developer’s overt politics aren’t just reflected in the game, they also shaped the studio and its name, said Anderson, who describes the studio as a “worker-owned game development team.”

The name for the team, Pixel Pushers Union 512 and the way it functions was inspired in part by the Industrial Workers of the World, an international labor union founded in 1905 in Chicago, and the desire to have shop democracy, he said.

“It’s the idea of putting the control of whatever product you’re making into the hands of the people who are actually making them,” he said. “So democratically — amongst ourselves — all the big decisions of the game, like what conventions we go to, the kind of boss fights we’re going to do, big content switches or pivots were making with the game, all come down to us and the democratic choices we make amongst ourselves.”

While Anderson said he’s spent much of his nearly 20-year career thinking about how there must be a better way to make games, the notion of unionization in game development has become a much more talked about topic lately.

“It’s in the news a lot, with a lot of big layoffs and things like that,” he said. “Where everybody in the C-suite levels isn’t really being affected by that at all and they’re walking off with millions and millions of dollars and all the workers are walking off with are their walking papers.

“We think that we could find a better, more efficient, more cost-effective way of production and we’re willing to give it a shot.”

“Tonight We Riot’s’ overt politics comes from an industry that traditionally avoids politics in games, even developers working on games that are inexorably connected to politics say their games are apolitical. But Anderson said the team and the game embrace politics, and aren’t worried about that impacting their game sales negatively.

“If anything, I think that people are actually pretty hungry for it, you know?” he said. “We’ve been showing this game off at conventions for about three years now and I’ve yet to have a negative encounter where someone got really angry at me about it.

“We’ve had a lot of real positive interactions from people saying, ‘I’ve been looking for a game like this. I really enjoy this.’ A gal came up to me today and asked me, ‘Hey, is this game socialist?’ And I said, ‘Yes, indeed it absolutely is.’ And she was like, ‘Cool. I’ve been wanting a game like this for a long time.’