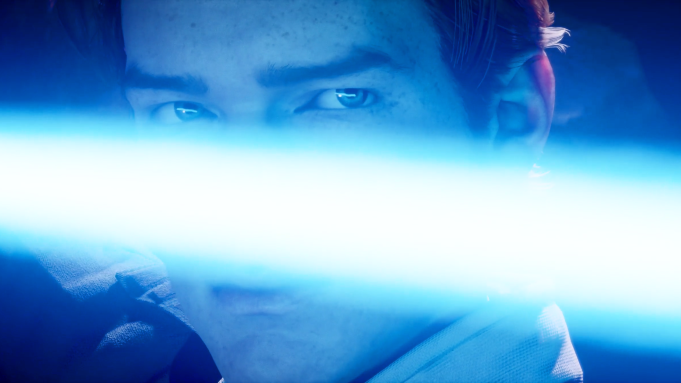 “Star Wars Jedi: Fallen Order” takes place in the time period after Episode III: Revenge of the Sith, after the Jedi have been decimated following the Emperor’s “Order 66” decree. Players take the role of a brand new character, Cal Kestis, who features the voice and likeness of actor Cameron Monaghan (“Gotham,” “Shameless”).

Kestis is a Force-wielding Jedi-in-training who is hiding in plain sight, keeping his powers under wraps to survive and evade capture from the powerful Empire. His motto, as highlighted in the first narrative trailer, is: “Don’t stand out, accept the past, trust no one.” However, as the game unfolds, Kestis eventually engages and gets involved in the conflict, joining with a band of other rebels that Monaghan described as “a strange family” during the panel discussion.

Asked about the opportunity to play a Jedi in the game, Monaghan replied, “It’s no big deal, it’s only every kid’s freaking dream ever to be a Jedi.” Director Stig Asmussen noted a “young Clint Eastwood quality” about the actor, which is part of why he was selected for the role.

“He has this sort of grit to him. He’s street-smart and wary, and he’s been through a lot,” said Monaghan about Kestis, who was created specifically for the game. “At the same time, there’s this sort of optimism to him. He’s ultimately a very good-hearted person, even though he’s experienced a bunch of tragedy. That was just something that immediately spoke to me—the story felt very human and very relatable.”

Kestis is joined by his droid, BD-1—which Respawn developers internally refer to as “Buddy Droid 1,” according to Asmussen—who can illuminate darker areas and has other unannounced skills that can be discovered and upgraded throughout the campaign. BD-1’s vocalizations were provided by Ben Burtt, the sound designer of the original Star Wars who did much the same for R2-D2 back when.

“Star Wars: Jedi Fallen Order” will begin on Bracca, one of several new planets developed for the game, although familiar locations and characters have also been promised. Kestis’ main antagonist will be the Second Sister, one of the Empire’s feared Inquisitors, who employs the menacing, glossy black Purge Troopers to do her bidding. EA brought a pair of costumed Purge Troopers out onstage during the panel, and the panelists noted that the Second Sister has already quietly appeared in Marvel’s “Darth Vader” comic book series ahead of today’s game reveal.

They also teased some sort of deeper back story to Kestis’ lightsaber in the game. Asmussen, best known for helming Sony’s “God of War III,” said that giving any further detail at this point would spoil the game’s story. “I don’t think we’re going to be talking about that until we release the game,” he said.

Respawn did not show off gameplay footage from the game, but Asmussen described the melee action as “thoughtful combat.” He said that it will be easy to understand but nuanced, requiring players to discover enemies’ weaknesses and exploit them. Kestis can use his lightsaber and Force powers in combat to disarm foes, plus EA’s press release promises puzzle-solving and platform elements amidst the action.

During the panel, Steve Blank—Lucasfilm’s director of franchise content and strategy—said that the collective team’s goal was, “Making a badass, kick-ass Jedi Star Wars game for people to love.” Between the “Titanfall” shooters and this spring’s battle royale sensation, “Apex Legends,” however, Respawn Entertainment is best known as a multiplayer-centric studio—although the “Titanfall 2” single-player campaign was widely celebrated.

Both at the panel and on social media beforehand, Respawn developers made an effort to emphasize that “Star Wars Jedi: Fallen Order” is purely a single-player, story-driven experience with no micro-transactions within. That is surely a response to the backlash that EA experienced following the release of 2017’s multiplayer-focused “Star Wars Battlefront II,” which Star Wars fans decried for its monetization techniques. Soon after the launch, EA tweaked the game and temporarily removed the ability to purchase in-game currency with real money.

“Star Wars Jedi: Fallen Order” sounds like a very different beast, however, and it will release on November 15 across all three platforms. Given the lack of gameplay footage today, it’s likely that we’ll see much more from the game at the EA Play 2019 event in June prior to E3.